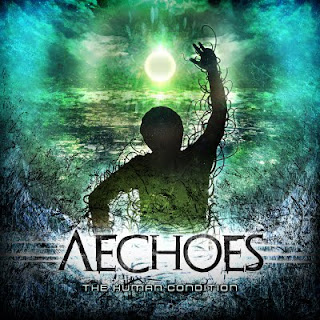 Where to start? If you want a band with an original, but yet solid sound, Aechoes is where its at. A band reigning from Las Vegas these men have a lot going for them. They possess their own sound, but making an impact on the music scene. Aechoes – ((ek-ōs)) 1. Any unheard and/or unseen events caused by the actions, thoughts, or decisions of a human being. What more can you say about a band that can raise the bar for a scene of posers and wannabes and fucking destroy it? You will never expect their music to go in the direction it does upon listening to the band’s debut album, The Human Condition. From the djent style of the guitars to the crushing sound of the drums and all wrapped up in a destructive package with Kiernan at the helm. This band is laying waste to the scene and making their own footprint on the music industry. Kiernan their vocalist can make you feel all sorts of emotions from the variance in his elegant singing to his gut retching screams. Doofy and Dynamite all bring the djent sound to the plate. These two men here along with Christian are what make this band have that livid sound. No band is complete without the heart pounding sounds of the battle drums. The drums are perfectly choreographed by Ferris throwing in physical emotion to the song at hand.

The CD in general is a masterpiece, mainstream metal bands all the sound same or follow the same cliché of chugga chugga bree brees. Aechoes wants to readify the music scene. They want to prove there is still bands out who give a fuck about their sound and not get buried in the mediocrity of “everyone” else. You wouldn’t want to label them death metal or metalcore. This band is mainly just METAL. No doubt, sure you can pigeon hole them, but they have their own sound from all the different and varying sounds, but that’s what make a band unique. Their attention to their sound. Each track has its own meaning and purpose to this masterpiece. The crushing guitar riffs, the emotionally demanding drumming, the hellacious strumming of the bass and the almost commanding vocals. Aechoes is a force to be reckoned with, don’t fuck with them or you’ll end up like everyone else, burning in a sea of cookie cutter soup and set to decimate.