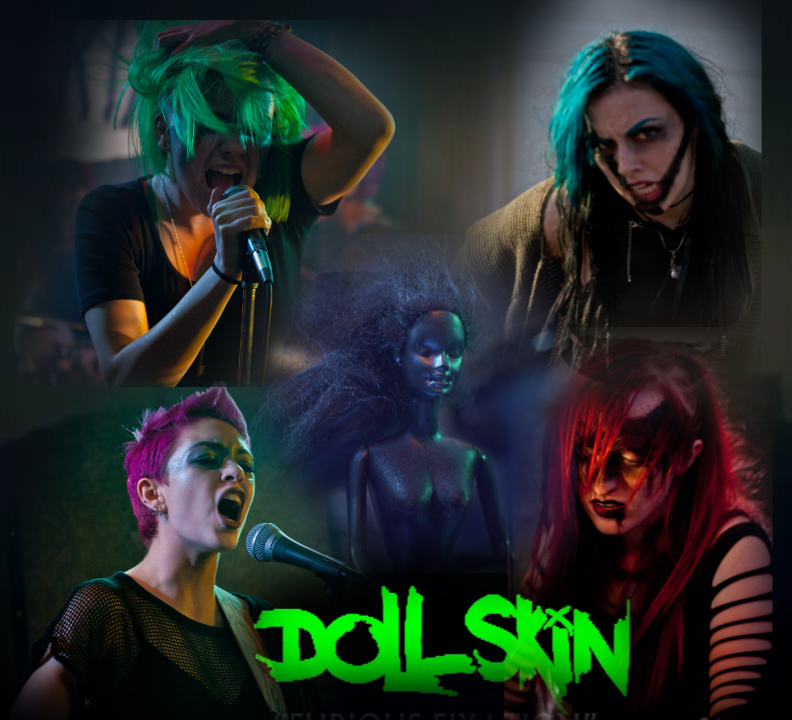 The video was shot entirely on location near Gettysburg, Pa and includes exclusive video footage from Wasteland, who in turn invited the band to play at their Wasteland Weekend event in September. Details can be found here: http://www.wastelandweekend.com/wasteland-weekend-2016-dates-announced/

“We are so beyond excited to be a part of the crazy world that is Wasteland Weekend! It’s been a dream of ours to play this for a long time, so it’s pretty surreal. They were so generous with their footage for our music video, we couldn’t be happier with how it looks.” -Meghan Herring/Doll Skin

Todd Chamberlain of High Rock Pictures who directed the video said, “It is with great pleasure that I present this music video for release and distribution. Working with Doll Skin and David Ellefson has been an incredible honor. The girls of Doll Skin are true performers and they worked so hard on this video. It was a long day on set, and everyone held up like a trooper. To say that the girls of Doll skin are talented is an understatement. Not only are they musically inclined, but have a good sense of what is needed for other aspects such as filming, and they have their act together better than half the people I know three times their age. I can’t wait to see what the future holds for these young ladies.”

“Furious Fixation is a powerful song about the fall of society all around the world and how it becomes like the dystopian society you see in the movie Mad Max. The song gives you the feeling that you’re a part of this society and you’re having to fight for your survival.” – Sydney Dolezal/Doll Skin

Cameos in the video were graciously provided by:

Jim Krut: The Helicopter Zombie in George Romero’s (God rest his soul) original 1978 Dawn of the Dead. Jim has many acting credits and is still active in the business, including co-starring in High Rock’s upcoming Indy horror flick “Sideling Hill”. He is also active on the Horror con circuit, attending many shows each year to meet with the fans. Jim is also a Vietnam Veteran.

Vernon Wells: Vernon has a long and distinguished acting career. He is from Australia and is one hell of a kind hearted gentleman. He appeared in “Mad Max 2: The Road Warrior”(1981) with Mel Gibson, “Weird Science”(1985), and “Commando”(1985) with Arnold Schwarzenegger, and much, much more. We are extremely grateful and honored to have him in this video.

IN YOUR FACE AGAIN was released this week on limited edition vinyl in 4 colors, Pink, Green, Blue, and Red, available from select retailers and empmerch.com

The video can be seen here: http://bravewords.com/news/exclusive-doll-skin-premier-mad-max-inspired-video-furious-fixation

Currently, the band is on the “Equal Rights, Equal Lefts” Tour with Otep.

About High Rock Pictures:
High Rock Pictures is co-owned by lifelong friends Todd Chamberlain and Jeffery Miner. High Rock is currently working on production of an Indy horror film “Sideling Hill”, written by Miner and directed by Chamberlain. Doll Skin has graciously allowed usage of some of their songs for that production. One scene from the movie appears in the Video and the girls will have a cameo appearance in the movie.
Todd Chamberlain-Director: Retired military veteran with service in the first Gulf War. Son, Jared, is following and now on active duty serving our nation. Started into filming several years ago and has appeared in Indy films “HOGMAUL: The Legend of Abrams County”, and “It’s Happening Again”(yet to be released). Was also on production staff for “Ghosting”, an Indy supernatural thriller. Currently co-owns High Rock Pictures with his partner Jeffery Miner.
Ed Mantell-Assistant Director: Ed is owner of Four Score and Seven Media, and was invaluable on this production. Has been in the industry for many years, and some of his past clients are Universal Pictures, HBO, Dreamworks, A&E, and MTV. Ed is also the mastermind behind the original video concept.
John Grove-Director of Photography: Started out his career in Los Angeles, and currently owns Invision Films in the Baltimore area. He has a bachelor’s degree in Cinematography. He has worked on features as well as music videos, TV shows, documentaries and commercials. He has worked on independent productions and with major studios and television networks such as Discovery Channel, Food Network, BET, PBS, TBS, CBS, Bravo and Nickelodeon. Some of his credits are “Elf-Man.” with Jason “Wee Man” Acuna and television shows such as “Restaurant Divided”, “Cupcake Wars”, “America’s Most Wanted”, “Stories of the ER”, “Pati’s Mexican Table”, “Master of the Mix” and “HMS Host”(Airport Commercials)
Hillary Styer-Production Coordinator: Hillary was instrumental in keeping everything flowing on the set. She is also a talented actress who appeared in V/H/S 2, Wereth Eleven, and numerous television shows including VEEP. Hillary is married to actor Gus Zucco.
Bob Backer-owner Blondies: Bob and his son, Wolfgang have a great place and a great staff, and made our presence there welcomed. Blondies, in Waynesboro, Pa., was the perfect set for this video. He also has a restaurant there that has incredibly good food, including an excellent brisket.
The Bikers of US Military Vets Motorcycle Club: These guys were awesome. They had some great patience (for bikers), and were very supportive of the project. Club President W.E. “Fuzzy” Henning, was very helpful in getting us the bikers for the shoot, along with Vice-President Todd “Petcock” Price who was point man for the group and a good personal friend of the Director.