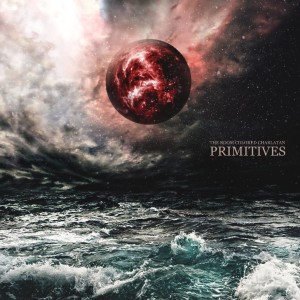 From the very first, tentative seconds of mankind’s existence, we have been watched from afar. Perpetually observed, viewed as a constantly “developing,” or “stagnant” species, we, as humans, are nothing but a source of entertainment to our spectral spectators. While we ignorantly parade our intelligence around our planet, flaunting it proudly on our sleeves, calling ourselves superior—when in reality, compared to those who have observed us from our inception, we are childish, or, primitive. That is, until The Room Colored Charlatan came along. Primitives is a full-length album that combines driving, explosive aggression with roomy, ethereal ambience and brilliant structure to create an immersive, intelligent experience uncommon to the shred-prone and chug-heavy world of progressive deathcore. The Room Colored Charlatan borrow from various influences, blend them together expertly and spike it with their own cunning brand of creative, out-of-this-world ingenuity to enthrall the listener and impress humanity’s intergalactic critics.

There is very little that is “subtle” about the origin of mankind—rather, it is the result of an explosive, aggressive burst headlong into existence. These are the ruthless, bold facets of The Room Colored Charlatan’s Primitives. While “Instinct” takes precious seconds to indulge the mystery from which the wellspring of man poured forth from, a majority of the track is rambunctious and dissonant—playing to mankind’s desire to press forth with force and passion into the unknown; the lengthy bout of brutal bliss that is “Survivalist Notion” follows a similar tactic, as does the closing portion of “Apex Predator,” as well as the climactic portion of the full-bodied and epic “The Atlas Artifact.”  These play to The Room Colored Charlatan’s aggressive side as well—making use of bright, blinding drumming contrasted with half-chugged, half-shredded guitar lines that are neither overly dissonant nor are they fluffy and discontinuous. Rather, guitarists Justin Seymour and Robert Allen ruthlessly—yet carefully—combine calculated portions of punishing dissonance and bright, flashy fretwork to create a listening experience akin to lightning: it quickly flashes through the listener’s head, frying brain cells and botching cognitive function, only to withdraw back to the ethereal, cloud-like song structure from whence it struck, remaining untraceable and almost unreal. These scattered moments of no-holds-barred technicality and aggression coming together are among the highest points on Primitives, as Cameron Witt’s crushing, steamrolling percussion synchronizes perfectly with the fretwork of Seymour and Allen to provide a razor sharp, slick edge to splice Jared Bush’s harsh, dominating vocals into the listener’s brain.

It isn’t long before the explosive burst of human consciousness begins to form a fragmenting, cosmic ripple—building outwards in great, galloping sonic repeats like cities and suburbs sprawling out from their urban epicenter. These “ripples” create an almost cloud-like atmosphere of ethereal, atmospheric ambience, which, furthermore creates a type of journey for the listener, punctuated by moments of jarring, harsh reality. This is the greater, more dominant portion of Primitives; the experience of floating through an ocean of smooth, splashy sound, roaming from squall to squall. “The Atlas Artifact,” as well as the album’s title track display this expertly, using Witt’s splashy cymbal work and mood-setting percussion, alongside the twisting, winding bass guitar that ebbs and flows from the masterful fingers of Michael Miller as a guide. Together, these two elements pave a wide-open-road for the fretwork of Seymour and Allen to once more dominate, painting the sea and sky with serene, vivid soundscapes that are capable (though they don’t always succeed) of enthralling the listener. Where these portions are most effective, they remain joined by Bush’s grating, hefty mid-range scream—with the exception of “Nexus Point,” which features the soulful croon of Ex-TesseracT vocalist Dan Tompkins. “Questions of Origin” is another example, borrowing more than a few leaflets from the likes of The Contortionist and Deftones alike, using winding bass to lead the guitars from ambience to aggression, letting the vocals follow as they like.

But what about stagnation? The era of technology and the innovation of the Internet has made communication lightning-fast, but growth through interaction stubborn and “outdated.” This is to say that, while The Room Colored Charlatan are masters of beautiful, brilliant ambience and technically driven, pseudo-dissonant aggression alike, the transitions between the two aren’t always as well done. “Nexus Point,” for example, includes transitions that show the percussion moving gallantly into frantic, flustered fills and speedy footwork while the guitar lingers behind, refusing to take the dive and producing an awkward hybrid of hyper and ambient. “The Atlas Artifact” makes a similar misstep, dwelling too long in moments of drawn-out ambience that transgress the effect of lulling the listener and looms dangerously close to boring them. While these moments certainly detract from the overall immersion into the great galactic journey that is Primitives, they don’t ruin the album by any means—nor are they terribly frequent. Rather, these brief blunders are reminders that even the masterful musicians that comprise The Room Colored Charlatan are human after all—even if at first listen, the awe-inspiring ambience and incredibly done aggression might liken these musicians to demi-Gods.

The journey of mankind’s development is a lengthy one—a Gone With the Wind styled epic of emotion and anger for the great galactic overseers to enthrall themselves with. Laden with countless peaks and perilously few pitfalls, Primitives follows this development through time and space, showing that The Room Colored Charlatan might just have what it takes to provoke the next step in technical deathcore’s evolution.

For Fans Of: The Contortionist, Between the Buried and Me, Nexilva, Monuments, Deftones