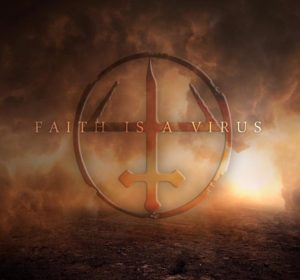 Humans fear sickness—it’s only natural. Before we are even taught it, we instinctually know that life is a sacred thing, especially if it’s our life. We guard it, against toxins, injury and abuse for fear of losing it. We take vitamins and pills, vaccinate and medicate against every pathology imaginable; bacteria, protozoans, viruses—every virus save one:

Taken from their forthcoming full length album, Faith: The Virus, deathcore outfit Revenant unleash all manners of Hell upon the listener with “The Virus,” an infectious, insidious and immense display of remorseless devastation. Eviscerating for its entirety and evolved from their already-immense debut EP, Revenant return to wreak havoc upon the listener’s head using everything from lacerating blast beats and brutalizing breakdowns to get their point across.

“The Virus” is an all-encompassing, all-consuming plague that takes elements from brutal death metal, doom metal, deathcore and just about anything else heavy and combines it all to excellent effect. Beginning with a skin-chilling symphonic arrangement that dives into lacerating, ludicrous blast beats and bombardments of brutalizing breakdowns without a second thought. Revenant are diverse in their approach, using such a sprawling array of metallic styles that just about anyone who enjoys heavier music will find something to keep them combing back for more, whether it be the eerie atmosphere, insanely technical percussion, ferocious riffs or ruthless displays of vocal talent. Nearing five minutes of pure fury, Revenant’s “The Virus,” as much as it is a testament to the band’s skill and prowess, is even moreso a testament to their songwriting. Fitting an entire library of subgenres into a single song without sounding forced or choppy is what defines this band’s excellence above all else. Fluid throughout and constantly oppressive, “The Virus” is a violent and visceral show of force. Not for the faint of heart, yet meant for the heavy music Loving masses, Revenant re-emerge from their short slumber with a metric ton of terror to show for it—a plague that stands to obliterate how you used to think of deathcore.

For Fans Of: Oceano, The Breathing Process, Thy Art is Murder, Signs of the Swarm, Infant Annihilator, Shadow of Intent