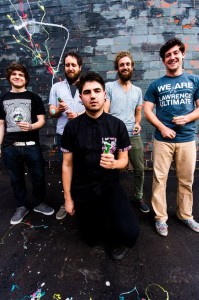 The Kansas City alternative rock group Mime Game will be releasing their debut full length record, currently untitled, in Spring of 2016. Their newest single “Legendary” has been aired on 96.5 The Buzz’s “Church of Lazlo” in Kansas City and is a sure sign of the type of music you can expect from this upcoming record.

Singer, guitarist and lyricist Dillon DeVoe formed Mime Game as a side project in 2007 while still fronting the emo alt-rock band Josephine Collective, then signed to the Warner Brothers label. He matured a distinct and resonant style after touring and writing with numerous artists across genres since his teens. DeVoe and Josephine Collective found themselves working with producer John Feldmann, as well as touring with bands like The Used and Story of the Year. Mime Game, which was home grown in Kansas, is a rotating live lineup with the permanent members being Dillon DeVoe on guitar and vocals, and TJ Murphy on drums.