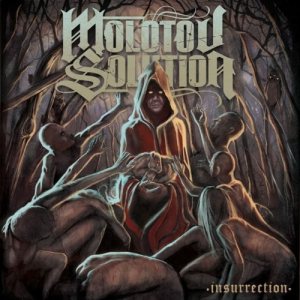 Insurrection is the story told by Nick about the coming of days. Not the end, just the beginning of an onslaught of total devastation. You could say this is the a copy of Wormworld, by The Acacia Strain or Fit For An Autopsy, but in the eyes of a person who is finally realizing what is taking place and what they think about it. The CD will strike your heart where it hurts most, and it will destroy your beliefs of this almighty nation. Nick has had time to prepare for this release. From the release of their self-titled CD to their previous release, The Harbinger, Nick has been warning every one of his thoughts and what he deems is the new coming age of man, friend against friend pitting each other to death just to make a point only to be torn down.

The lyrics to this CD are just something I love in the deathcore genre. Sure you have the occasional love/hate, I fucking want to kill you lyrics, but this is a FUCKING MESSAGE to the masses. This CD is warning all the people of the coming final hour. Stating when each will be tested of their beliefs and shot for their commitment to this great nation of bloodshed. Throughout this CD you will be shocked, smashed into the ground and thrown into the fucking air by those beastly breakdowns. Accompanied by this onslaught is the message that we will fail, and we will fall for trying to seek our beliefs. The real message to divide and conquer, the almighty truth of how the justice is for all those who swear by it, or for us to finally take a stand fight for something and FUCKING RISE

The key tracks in this masterpiece are Insurrection and Cruor Viaticus. I honed in and instantly fell in love with these two songs, not only because of the fade out with the screams of Nick, but because of the actual message they are trying to get across. They don’t want to live in a world of mediocrity they want to prove there is a reason to exist. As stated, fuck your world you can have it. Cruor Viaticus is the story of how our nation is buying security and bloodshed, senseless blood shed is the collateral that coincides with this spreading of lies that will NEVER FUCKING BLEED US DRY.

This CD is for everyone, whether or not you listen to this genre, once you read the lyrics you will be hooked. I look at this CD as being the offspring of the many bands who also try to state a message of warning, that all of which need to heed. Such bands consist of The Acacia Strain, Fit For An Autopsy and the late Rage Against The Machine. Sure they’re not in the same genre group, but their lyrics are all a warning of what is coming and will happen if we choose to follow blindlessly and let the nation decide our demise.