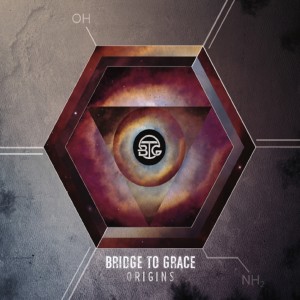 These days, it’s really hard for a hard rock band to catch my ear. As it seems most strive to be radio ready, which is fine but leaves us with a formulaic, average batch of songs. I was immediately taken aback when I heard Bridge to Grace. This Atlanta quartet is anything but ordinary. Drawing influence from bands like Sevendust, Breaking Benjamin and Pop Evil, they’ve concocted the recipe to really get a crowd moving. With their soon-to-be released debut full-length Origins, they’ve set the bar for hard rock releases in 2015. Vocalist David Garcia has a unique voice that catches your attention immediately. Spanning 17 tracks, there is no shortage of variety on this album. Hard or soft, heavy or light… this album has it all. Spawning 2 singles so far in the form of the emotional “Everything” and the in-your-face, heavier “Bitch” their radio presence is a very welcomed feeling.

From the start, this album packs a punch as “Take It All” resonates through your speakers. This track has some heavy Breaking Benjamin influence, in the guitars especially. When I first heard this track, I felt it could have been a single but after further listens, it deserves its intro spot on the album. It definitely sets the stage for what’s to come. With it’s heavy guitar tone, mid-tempo drumming and explosive chorus… it immediately gives you an idea of the talent these 4 individuals possess.

“Everything” is the lead single from the album and it quickly makes the reason known. This track is as beautiful and soaring as it is infectious. It does a wonderful job of really displaying the talents of everyone in the band. There’s a killer guitar solo from Alex Cabrera that really gets that air guitar feeling flowing through you. Do yourself a favor and check this one out.

“Bitch” is the second single from the album. Boasting a bit of a southern hard rock vibe, coupled with a strong amount of venom and wrapped up into an aggressive little music bow, we’re shown a heavier side of the band. This track is centric around a common theme in the genre, love-hate relationships. It doesn’t take a rocket scientist to read the title and determine what type of track they’re about to hear. However, B2G take it to a whole new level.

“The Fold” was the first single they ever released to radio, back in January of 2014. With the release of Origins, we see it take a whole new form. Re-recorded, revised and really brought to life we hear this instant classic in a new light. It’s not hard to see why they chose this track to reveal themselves to the world of radio rock. It stands toe to toe with the best radio rock tracks today and continues to impress, even more so in it’s new form.

The final track really brings it all together beautifully. “Until the World Ends” begins as a piano driven, monster of a ballad. By the time the full band comes in, you’re fully immersed in the imagery of this song. This is a song about discovering true love and keeping true until the end of days. Showcasing Garcia’s beautiful vocal style like no track before it, this is a perfect way to close out one of the best albums of 2015.

Bridge to Grace has proven themselves a formidable ally in the modern rock scene with Origins. If you, like me, were beginning to lose faith in the genre, you might want to pick yourself up a copy of Origins and re-evaluate that. The only question left is: What’s next and when can we hear more? Origins whets an insatiable appetite, even through 17 tracks which is quite a bit longer than normal albums these days. You will be left craving more. Pick up Origins on August 28th via Long Run Records!