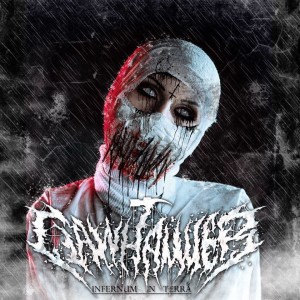 We all have our own conceptions of what Hell on Earth would actually be like. For some, it’s a world without Game of Thrones, or a world without dark chocolate—you get the point, trivial things. However, true hell on earth would be unquestionably more dismal. It would be the stuff of night terrors—your family bound and gagged, executed before your eyes on repeat; teeth being pried one by one from your head without sedative or anesthetic. In other words, true hell on earth would be intense and unimaginably bleak—but nowhere near as dismal and crushing as Clawhammer’s debut EP, Infernum in Terra. Aptly named, this Glasgow-based “slamdown” act’s debut release is pure punishment without relent or remorse. Gritty, gruesome and grotesque, Clawhammer are as infectiously catchy as chlamydia and as prolapse-inducingly lethal as colo-rectal cancer—making this one quintet fans of heavy music certainly want to get infected by.

There’s grime, there’s filth, and then inferior to the bottom of the barrel, there’s Clawhammer’s uniquely intense and ultra-aggressive sound. Infernum in Terra is a lesson in heaviness—nothing more and nothing less—with eviscerating slams and skin-peeing speed colliding head on with riff-driven attitude and catchiness. From the first pummeling salvo of the album’s title track and introduction, percussionist Toni Elrick settles for nothing less than pure punishment. Combining technicality and tremendous depth in one volatile vector, Elrick’s energetic display of drum-savvy percussion sets the candor and mood for the band’s entire release. Whether it’s his punctual fill-work and technically-infused speed on”Infernum in Terra” or “Realm of the Wicked” or his belligerent brutality and snails-pace percussive bombardment on “Lynching,” Elrick creates a foundation atop which the entirety of Clawhammer can wreak havoc. Bassist Craig Rowan is Elrick’s steadily haunting shadow—adding depth to each of his relentlessly heavy slams and punch to every powerful breakdown—giving Clawhammer a deep, dirty low end that cracks ribs and ruptures organs without effort. Take “Lynching,” where Rowan rumbles alongside Elrick constantly, ensuring catastrophe with every grisly groove. However, where Elrick’s drumming and Rowan’s bass are strong, they are the foundation for the ferocious fretwork of guitarists Robert and Nathan Campbell. This dynamic duo work in dialectic harmony, inflicting despair and devastation with every chug and riff. The duo shine on the album’s introduction, especially, catching the listener’s ear right off the bat with a haunting, hellish lead that dives into abyssal aggression before the listener can even say “slam.”

Infernum in Terra is intense before even considering Clawhammer’s crushing vocal element; however once frontman Chrissy Jones lets loose a series of bone-melting bellows and ear-splitting screeches, the listener will hardly be able to function. Jones’ vocals throughout Clawhammer’s debut are nothing short of devilish. Those familiar with his features in the works of slamming death metal acts like Vulvodynia no doubt have at least part of an idea what they’re in for—but certainly no indication of the full scope of horrors that awaits them. Even independently of the incredible array of guest vocalists throughout Infernum in Terra (Luke Griffin, Rob and Phips of Brawl Between Enemies and many more), Jones’ vocals are genre-defining. A perfect ratio of pure hate and horrific skill and diversity, Jones belts out pure putridity wrapped up an easy-to-swallow and catchy package—ensuring that even if listeners aren’t sure what he’s saying on “Agony of Judas,” his vocal patterns will stay stuck in their heads for days to come.

While there isn’t a scrap of proggy, noodling shred on Infernum in Terra, nor is there much in the way of outright technicality (save the speed of Elrick’s drumming and Jones’ absurd vocal range), Clawhammer deserve a nod (or more) for the advancement of pure heaviness. Hellish from start to finish, listening to Infernum in Terra is like listening to a catastrophic disease sweep the continent—bursting forth out of Scotland and swallowing the whole world—feeding until the human race is history. Gory, gruesome, and with just the right amount of Glasgow Grittiness, Clawhammer’s debut is an example of slamming deathcore meets beatdown hardcore done dazzlingly well.

For Fans Of: Brawl Between Enemies, Vulvodynia, Begging for Incest, Carbine