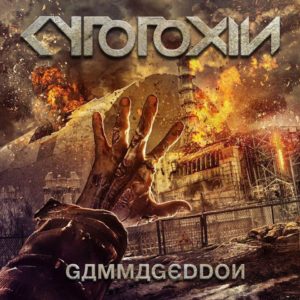 Sometimes, things that happen in the past stay in the past—doing little to cause continuing damage or distraction to our daily lives. Remember the Hindenburg collision? For some of you, the answer is probably “what’s a Hindenburg?” because it simply has little influence in the way we live our lives today.

Other events, however, continue to shape the world as we know it, even when steeped in the past.

One such example is the catastrophic nuclear explosion that occurred the night of April 26th in Chernobyl, Ukraine. This event—commonly referred to as just “Chernobyl”—marked a severe loss of civilian life and continued natural side-effects that remain relevant even now. Just as the soil in Chernobyl is permeated with radiation and nuclear toxicity, the worldwide extreme metal scene is flooded with the gut-wrenching brutality of Saxon-based, German brutal death metal outfit Cytotoxin. Drawing conceptual influence from the events and aftermath of that fateful day over 30 years ago, Cytotoxin’s third full length release, Gammageddon is a tale of mushroom-cloud sized proportions and lethality second only to that of a nuclear blast. Combining everything under the sun—from slamming death metal, brutal death, deathcore and technical death metal—Cytotoxin forge a furious example of scathing brutality that will go down in history as one of 2017’s most explosive extreme metal releases.

From the first seconds of “Radiatus Generis,” Cytotoxin waste no time in waging a full-on nuclear assault on the listener. With a style of speed and surreal intensity characteristic of a band signed to Unique Leader Records, and the precision of an act who are both experienced and extremely talented, Cytotoxin’s Gammageddon is absurd in more ways than can be readily described with words. Built on a foundation of lightspeed percussion that blends skin-peeling blast beats and kick drum speed that sounds almost like a blur of low-end havoc, Cytotoxin’s dynamic is tighter than a great majority of their peers. The epic and raunchy “Outearthed” is a beautiful example of this—with blast beats and fills that seem impossible and sharp, scalding riffs that melt flesh from bone with no trouble. Even Cytotoxin’s bass guitar is up to par with the remainder of the band’s extreme speed and ridiculous, ruthless heaviness. Songs like “Radiatus Generis” see stuttering breakdowns wedged between solos and slams where the band’s bass is prominent and thick, coating the listener’s head like acidic sludge. Meanwhile, the closing segment of “Outearthed” takes a solid-yet-standard deathcore styled breakdown and drags it out across the listener’s skin, making every splashy cymbal hit feel like slow death. Meanwhile, ambitious tracks like “Sector Zero” and “Redefining Zenith” see the band’s two guitarists going berserk, sweeping, soloing and staccato-ing their way across forty minutes of mayhem. Gammageddon sees Cytotoxin attacking with the careful precision of a tactical military strike, yet wielding heaviness and wonton disregard for human life much akin to an accidental nuclear outburst.

Just as Cytotoxin’s musical talents combine influence from all over the heavy music spectrum, the band’s vocalist is just as multifaceted. Songs like “Outearthed” and “Radiatus Generis” see blackened/porno-grind gurgles executed alongside mid-range roars—and even while I’m the last person to enjoy gurgled, guttural vocal styles akin to those on “Outearthed,” Cytotoxin’s made me eat my own words and expectations. Every second—save the interlude and instrumental conclusion—see Gammageddon dominating with a comprehensive display of dynamic vocal prowess, doing the devastating instrumentation proud. While only truly enjoyable when listening along side a lyric booklet, many of the aggressive anthems on Gammageddon are conceptually driven and exceptionally detailed. In spite of the language barrier, Cytotoxin’s dedication to the Chernobyl storyline is nothing short of admirable, with many songs—especially “Chernopolis”—making the listener want to personally research the incredible event that serves as the band’s impetus.

If you scroll through Facebook or your favorite heavy music forum, you’ll see Cytotoxin described a lot of ways. One of my favorites is “Rings of Saturn but with slams—and better,” while another is “a more accessible Cattle Decapitation.” Better yet is “a conceptual Ingested”—but no matter how many of these you read, none truly get at what Gammageddon really is. Taking the technical shred of a tech death band and adding slamming brutality and hyperspeed heaviness with just enough contemporary deathcore thrown in there to make the album more accessible, Cytotoxin have been working on this release for several years now and, without a doubt, it shows. A solid forty minutes of fury, Gammageddon is neither too long nor subject to brevity, especially with its relatively dense content. Bright, explosive and brutal, Cytotoxin are crafting a legacy just as lurid as Chernobyl’s own.

For Fans Of: Cattle Decapitation, Signs of the Swarm, Ingested, Rings of Saturn