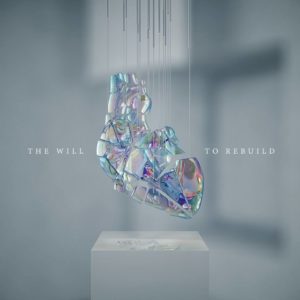 Artist: For All Eternity

Album: The Will to Rebuild

Have you ever been in a situation where it seemed almost impossible to gather yourself together—to steel your resolve—and push forward? Where the entire world was scheming against you, planning your downfall and, no matter your effort, it was always just one step ahead?

Of course you have—it’s part of being human, and, honestly, I think it’s a shame if you (or anyone) haven’t been in one of those positions. It’s the overwhelming anxiety and fear inflicted by immense adversity—the fear of the unknown and potentially undoable—that makes us rise to our best. That’s part of what it means to be human: to overcome, against all odds—to dig deep, grit your teeth and just do it. It’s the toughest times that make us the best versions of ourselves and if you didn’t believe it before hearing For All Eternity’s The Will to Rebuild, you surely will afterwards. A band who, in spite of an incredible breakout full-length in Metanoia—were still struggling with expressing their true identity through sound, For All Eternity reached deep within themselves and used personal, emotional motivation melded with magnificent theatrics and intelligent structure to bring us their latest full-length. The Will to Rebuild captures desperation, depressive, oppressed depravity and all the beauty and positivity that can stem forth—the feeling that triumphs when, against all odds, self-loathing is vanquished and The Will to Rebuild overcomes.

While there was nothing wrong with Metanoia, it was a superficial glimpse at the bands deeper, more intense and vividly emotional core. With a greater focus on outright aggression and, in some ways, the sound of a younger and more explosive, hostile outfit, Metanoia was great for the band that wrote it then and the time it was written in.

This is not that time—and this version of For All Eternity is certainly something new as well. While there is still more than the listener’s fair share of aggression and attitude to be had (see “Fallout” or “Nightmare”), there is a much more orchestral, sprawling sound to The Will to Rebuild that gives it a feel as if you’re half-way steeped into the score of a multi-million dollar movie production. Percussionist Michael Buckley contributes to this from the get-go, oscillating between punchy portions that give the first few songs of the record a relative kick, yet knowing when to hang back and provide a subtle, tasteful foundation on sections of “September” and “Deep Down.” Buckley still devastates with quick fills and fun, furious patterns during much of The Will to Rebuild—so don’t fear that the band have lost their edge—but he spaces it out, working with bassist Scott Dibley to create fluid, fantastic grooves that move quick, cut deeply and never slow down too much to keep the pace of the record fluid and engaging. This dynamic is filled out when it comes to the work of guitarists Nicholas Page and Jeremy Mosiejczuk. Together, the duo create crushing breakdowns (“Fallout,” or “Deep Down,” or “Derailed”) that are dotted with soaring moments of incredible melody—aided by the bands use of sparse electronic segments in the form of interludes and relative breaks seen here and there. Page and Mosiejczuk aren’t out to shred until the listener’s ears are pulp—nor are they the two twin sledge hammers one would expect out of a downtempo deathcore project. Instead, they harmonize to bring beauty and brutality together in a manner that nearly defies explanation, working cohesively as a beautiful, emotionally complex canvas for the group’s vocal element.

Considering the relative redistribution of instrumental aggression and melody about the band’s solid, study fulcrum, it’s only fair that the vocals follow suit. With this in mind, frontman Shane Carroll—aided by Buckley—favors less the raw, gritty and immolating styles seen on Metanoia, and instead offer a more striking balance between moving, soulful melody and magnificently sung segments—like those in “Vivid,” or “Nightmare”–and the belligerent, gut-busting roars that the band had already established as their mainstay long before The Will to Rebuild. Make no mistake—songs like “Fallout” still the group, and Carroll especially, using a plethora of aggressive and raw styles. Then, however, there are songs like “Vivid,” which is melancholy, brooding—but beautifully crooned all the same—and the quirky, theatric “Shadow,” which kicks the album off in an off-kilter fashion that quickly segues into sinister aggression. This is an unpredictable turn for many fans of the band—dare I say, a good turn at that—but it does warrant a disclaimer. Many fans of the group’s previous work will likely dive headlong into The Will to Rebuild expecting a brash and ruthless release that moves quick, hits hard and doesn’t stop, and, in that respect, they might find themselves disappointed, initially, by the release. This is transient, however, as Carroll’s voice—coupled with the excellent instrumentation, quickly offer many more things to love in greater depth than mere heaviness.

Maybe not the release people were expecting, or the release people thought they wanted from For All Eternity—but certainly an excellent surprise in every right—The Will to Rebuild is fun, meaningful and magnificently well written with little more than a slight learning curve to detract from its overall score. Once the listener’s mind is opened up, the album is sure to earn itself a well-deserved spot, stuck on repeat in the listener’s head, helping them to rebuild after any instance of immeasurable trial.

For Fans Of: Wage War, Architects, Like Moths to Flames, For Today