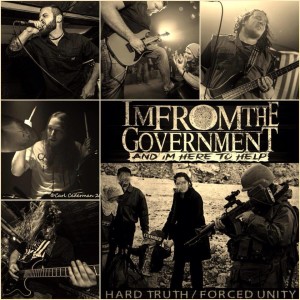 Artist: I’m From the Government and I’m Here to Help

By any means, you life a safe, standard, American life. Nestled in the depths of the good ol’ burbs, huddled up in the token post-WWII Nuclear Family dynamic, you are the very definition of standard. Maybe it’s a dog, or a cat. Maybe its two sons or a son and a daughter—little Suzie and Johnny—but it doesn’t really matter. The life you’ve put so much of yourself into is about to be invaded, torn into shreds and left in disrepair—all by the people you counted on to keep it safe. Buffalo-based thrash-metal-turned-hardcore act I’m From the Government and I’m Here to Help are the ones to do it, and they do it with the eviscerating ice-pick of an EP that is Hard Truth/Forced Unity. By combining hard-hitting, lacerating riffs with punchy percussion and the occasional skull-splitting breakdown or pinch of pulverizing beatdown, I’m From the Government and I’m Here to Help create a style of metalcore on Hard Truth/Forced Unity that is as unique as their eclectic and verbose name.

The smish-smash and smattering of various influences throughout Hard Truth/Forced Unity truly makes I’m From the Government and I’m Here to Help a hard band to categorize. On one hand, there is a vast majority of the instrumentation to consider; especially on tracks “Scienomics” and “#Doubtit These tracks favor the band’s collective penchant for thrashy, riff-driven instrumentation. Aggressive, driving guitars—flowing from the furious fingers of Robby Warren and Ronnie LePine—provide kilojoules of intense, rampaging energy and visceral, in-your-face aggression throughout each track—driven of course, by the percussion. Steve Keicher provides an incessant battery of galloping, fleet-footed drumming that drives the wrought-iron riffs into the listener’s head like nails into a coffin, sealing shut their dead-and-practically-buried American Dream. “No Time For Games” is particularly exemplary of this, staying true to its bold name. This track is a thorough, languishing assault on the listener, barraging them with a smorgasbord of smashing percussion, skin-slicing riffs and intense, jarring vocals that range from visceral, throat-peeling screams to a gruff, barked yell. These elements, however numerous and elaborate as they may be, make up only one part of the band’s overall dynamic.

When I’m From the Government and I’m Here to Help aren’t threatening the listener’s social freedoms with thrashing, terrifying shred and punishing percussion, they’re crushing their hopes and dreams with bold, no-nonsense beatdown and hardcore aggression. “Divided,” as well as “CMXIX” are both sturdy examples of these bold bastions of raw, relentless aggression. Guitars that previously favored pseudo-technical structure and dynamic, shredding riffs take off their gloves and bash the listener’s cheeks in with bare knuckles, grooving and grinding alongside Jim Candytree’s brilliant basswork. On top of it all, the vocals shift away from their metallic combination of crooned singing and tough, gruff shouts to showcase Tom Bieler’s exceptional, full-bodied and relentless array of screams. “CMXIX” shows this absolutely awesomely, covering a high, strained, edgy tone to a low, meaty and pissed harsh vocal style that lurks somewhere in the murky terrain between a growl and a guttural. The addition of deep, plodding vocals to the instrumentation to complete Hard Truth/Forced Unity’s full, immersive approach to “the heavy” is just one example of the vocals serving as a lynchpin to the band’s dynamic—a function which can be just as positive as it can deleterious.

While I’m From the Government and I’m Here to Help expertly play both metallic, thrashy, fueled-by-shred music and heavy, brooding and bitter music alike, at times, their ability to combine the two comes across as questionable. While the album’s closing track, “Territorial Grounds” combines all of the band’s approaches to thrashing, raunchy metal and hard-hitting hardcore perfectly, this isn’t the case across all of Hard Truth/Forced Unity. “Scienomics,” for example, has a half-crooned, half-grunted style of clean vocal that seems simply out of place; especially when the pummeling, blunt percussion and grooving guitars already seem ever-so-slightly mismatched. Parts of “#Doubtit” also encounter the same problem; as I’m From the Government and I’m Here to Help can’t seem to make it clear whether they’re attempting to tactically combine two genres, or just cannot decide which one they want to play. However, these elements all come out in the wash when the listener examines the greater picture that is Hard Truth/Forced Unity; truth be told, there’s nothing hard to swallow about this EP. It is a brief and magnificent combination of two expertly played genres—even if at times, the jigsaw puzzle that is the album seems forced and mismatched on a microscale.

Here to help? There is very little helpful about what has happened to your quiet, patriotic, American life. I’m From the Government and I’m Here to Help use Hard Truth/Forced Unity to break down the listener’s door, slice their skin wide open with thrashing riffs, and bash their bones into dust with pummeling, hardcore aggression. Taking everything they can, and breaking everything they can’t take, this Buffalo-based band bring to the table a new, refreshing combination of genres that, with ever-so-slightly more refining, could easily take over the entire nation.

For Fans Of: Dealey Plaza, Every Time I Die, All That Remains, Failure in Vanity, Fail to Decay