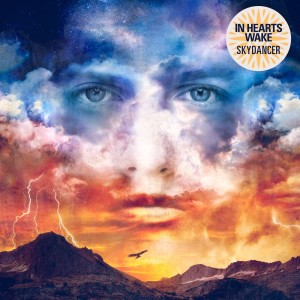 Artist: In Hearts Wake
Album: Skydancer
Rating: 9/10
In Hearts Wake’s Skydancer is not only an excellent follow-up to 2013’s Earthwalker, but also stands up well on its own.  The album is a continuation of both the themes and sound of its counterpart, keeping up with a hard and melodic sound that does a  good job of representing the album’s attitude, which has (obviously) a constant environmental message (which is a bit of a constant in many Australian artists these days), and also takes a stance on human relations (the best example for this is easily ‘Erase,’ in which the band is accompanied by members of Hacktivist).  The guitarwork in this album is competent and is the primary focus when it comes to the representation of the emotion behind each track, as well as creating an atmospheric environment for each song.  While the guitars take up a good portion of the spotlight (‘Oblivion’ all the way), the vocal sections in this album definitely aren’t easy to miss–the unclean vocals on this album are definitely some of the most competent from this band yet and are a must hear, but are also completely contrasted by the higher clean vocals on this album–the two don’t exactly meld together the best, but at the same time fit with the rest of the music perfectly fine.

As a whole, Skydancer does what it was meant to do and follows up Earthwalker flawlessly, and is definitely some of the band’s greatest and most entertaining work so far.

Catch them on tour with Northlane, Like Moths to Flames and Oceans Ate Alaska this Summer

Catch them on tour with Asking Alexandria, August Burns Red and Memphis May Fire this Fall

Review brought to you by: Russell Ritchey