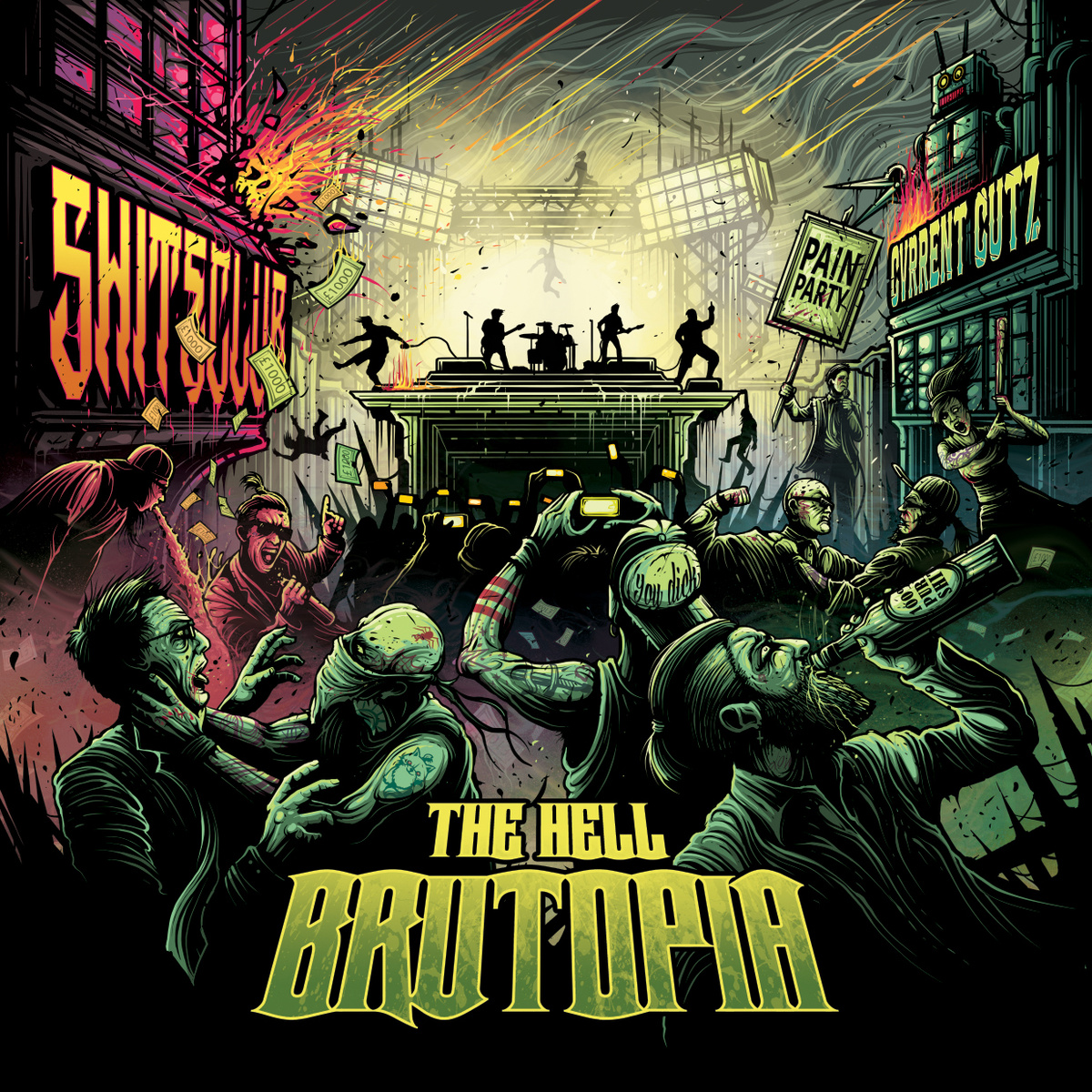 Are you bored of the heavy music community’s intensifying pissing contest between who can be more progressive/heavy/fast? Do genre wars between keyboard warriors get under your skin faster than they used to? Do you yearn for a time and place where music was just fun, without any frills or elitism?

If you answered “yes” to any or all of these statements, the ladies and gentlemen, The Hell has your ticket to escape—to a wonderful, wickedly heavy Eden called Brutopia. A land filled with zany riffs, jarring breakdowns and more grooves than you can possibly head bang to, Brutopia is, simply put, the most fun you will have listening to a heavy album all year. Jam-packed with gimmicks and gut-twisting heaviness both, these Ultraviolent UK mosh warriors will have you spin kicking in seconds—whether it’s in the pit, your living room or visiting your grandparents—no one is safe from Brutopia.

The Hell use a simple, sinister instrumental approach to attack the listener’s sanity throughout Brutopia. Fast, pissed off percussion is the foundation for furious, riff-heavy tracks that spiral into slamming breakdowns and beefy grooves at the drop of a hat. From the opening licks of “One More Time,” this is abundantly clear: while The Hell are here to have some fun, they’re not afraid to split some skulls in the process. Whether it’s the brain-rattling climactic riff in “Shite Club,” the dizzying chorus to “I’ve got Loads of Money” or the world-ending breakdown in the album’s closing track, The Hell are a tightly knit, terrifyingly catchy killing machine that get their unique blend of campy riffs and crushing breakdowns stuck in the listener’s head like a fishhook made of lead. As Brutopia continues on, The Hell keep reaching further outside of the box to keep the listener engaged—obvious with the thrash-metallic feel to “Painiac” and the catchy fragments of furious fretwork in “Don’t be a Dick” and “We’re All the Same.” Listeners eager to write off The Hell on the basis that they are “a joke band with no technical merit” will be forced to gag on their words by the time Brutopia has run its course, as—while true, The Hell might not be super serious—they prove that they are still adept at their instruments.

Without the vocal and lyrical element to Brutopia, The Hell could be mistaken for a throwback thrash-metalcore act that runs on hairspray and sick breakdowns. However, with catchy, harsh shouts and absolutely ridiculous lyrics, The Hell easily win over the listener’s heart. “I’ve Got Loads of Money” is the first true blue track that sees The Hell embracing their absurd, off-the-wall lyrical elements heard in previous anthems like “Groovehammer” and “Bangers and Mosh,” and from there, it only gets more insane. “The Fever” opens with a campy (you’re going to find that word is especially useful in describing The Hell) skit that dives heard first into goofy lyrical territory—while “Shite Club” does more or less the same. All the while, The Hell’s vocals are straightforward and earnest; a harshly spat shout that occasionally dips into lower, more menacing tones. The vocals adopt a theme similar to the band’s instrumentation: the key isn’t to reinvent the wheel of heavy music—it’s to completely set it on fire and make jokes about it as it burns.

Fast, furious and far from serious, The Hell combine bouncy, hefty guitars with booming bass and blitzkrieg percussion to give listeners an display in lacerating, lurid metal with hints of heavy-handed hardcore to keep necks snapping and fists flailing. The bastard child of Motley Crue and Martyr Defiled, this quixotic quintet put forth an album that redefines how heavy music enthusiasts enjoy listening to aggressive anthems preaching violence, anger and…enormous amounts of wealth. However, if you’re one of the stern-faced, lock-jawed purists who frown upon The Hell’s healthy use of gimmicks and humor, then…maybe you should just get over it and get a sense of humor.

After all, they’re The fucking Hell, you dick.