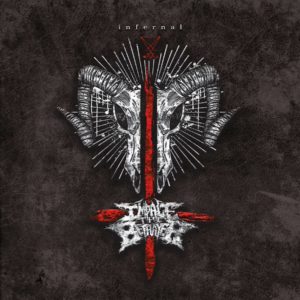 We have a special way of discussing things we determine to be truly evil. Sure—commonplace acts of unkindness and selfishness are abundant in every day conversation; we don’t give them a second thought. Hell, you can’t even turn on the news without being bombarded by “so-and-so stole X from Y, police are investigating…” or some story similar.

But then there are the sorts of people, places and things we only talk about behind closed doors with hushed voices—the sort of things you almost whisper because it is so depraved and devilish you’re afraid you might summon Satan in the flesh just by thinking it. Those things are Infernal—a breed of evil that consumes everything it touches, turns purity to putridity and leaves nothing sacred unscarred. What better name, then, could there be for the long-awaited comeback EP from North Carolinian crushing deathcore outfit, Impale the Betrayer? Infernal is an immense and intimidating display of brutality that hits hard enough to bend steel and crack bones, comprised of scathing riffs and sinister grooves immolating enough to incinerate flesh. Infernal is just that—Infernal—and an excellent testament to Impale the Betrayer’s ability to keep it more than brutal, even after a lengthy hiatus.

Impale the Betrayer, even in spite of a relatively compact discography, veterans in the deathcore scene—with A Breeding Ground for Monsters being one of the first albums I reviewed for the site you’re on right now. With a lengthy tenure of inspiring terror with tremendous breakdowns and tediously ripped riffs, it should be no surprise that the group are experts at evisceration: something evident from the first track of Infernal. Percussionist Trey Buff wastes little time in proving his worth on Infernal, taking off at a breakneck pace right as the sample that begins “Morningstar” concludes. Buff just keeps on laying into the listener for track after track, with “Morningstar” and “Nemesis” highlighting his penchant for punishing speed just as “Eye of the Beholder” showcases his ability to write low, lurid breakdowns that slam at the listener until their brains seep out of their ears. Infernal’s intensity is doubly unsurprising, as it stands to be the oldest project by Eastern heavy music mastermind and guitarist David Gantt (InVoker, Filth). Gantt works with bassist Nathan Pittman, and together, the two groove, chug and riff until their isn’t a square inch of skin left on the listener’s ravaged frame. “Nemesis” highlights this—with blast beats that serve as a scaffold for furiously fretted leads and grotesquely heavy bass grooves, just as “Eye of the Beholder” and the EP’s titular track display bombastic heaviness and breakdowns bold enough to decimate Earth. Gantt and Pittman are an incredible force that work in dialectic with the punchy percussion to create deathcore that sounds like it was written in the genre’s first golden era and managed to concentrate with time, erupting in 2017 with immaculate production, just when the genre’s revival is at hand.

While Gantt’s is a familiar name to fans of heavy music, his isn’t the only one when it comes to Infernal. Frontman Dustin Mitchell—also of Filth and InVoker—lends his expertise here, reigning less with roaring lows and raw mid-range yells, but shrill screams and blistering highs. Mitchell’s resume grows even further with his work as Impale the Betrayer’s frontman—and while his grisly low bellows are abundant on lead single “Eye of the Beholder,” his high pitched vocal efforts deftly strike at the listener in a fashion they likely didn’t even see coming. “Nemesis” and closing number “The Wicker Tree” see Mitchell in ace form, where his brief vocals on “Morningstar” and his immense performance on “Eye of the Beholder” are testaments to his ability to craft grisly, gory lyrics that serve as another way in which Impale the Betrayer do their name and traditional deathcore roots proud. Infernal may be short, but just about every second sees Mitchell working harder than ever to thoroughly crush the listener’s sanity.

A contemporary take on yesteryear’s revered deathcore stylings, Impale the Betrayer position themselves squarely at the forefront of the genre’s resurgence into relevance. With Mitchell’s vocal prowess and Gantt’s expert songwriting both in top form, Infernal’s only issue lies in that it might be the shortest comeback release this year has seen. Lasting a mere 16 minutes, with only a little over 14 of those containing tangible music, Impale the Betrayer might leave the listener feeling ever so slightly short-changed in terms of quantity. However, when it comes to quality, Infernal inflicts such a sprawling array of afflictions upon the listener that “short-changed” stands to be one of the last things they’re likely to really feel.

For Fans Of: Oceano, Jerome, Filth, I Declare War, We Are the End