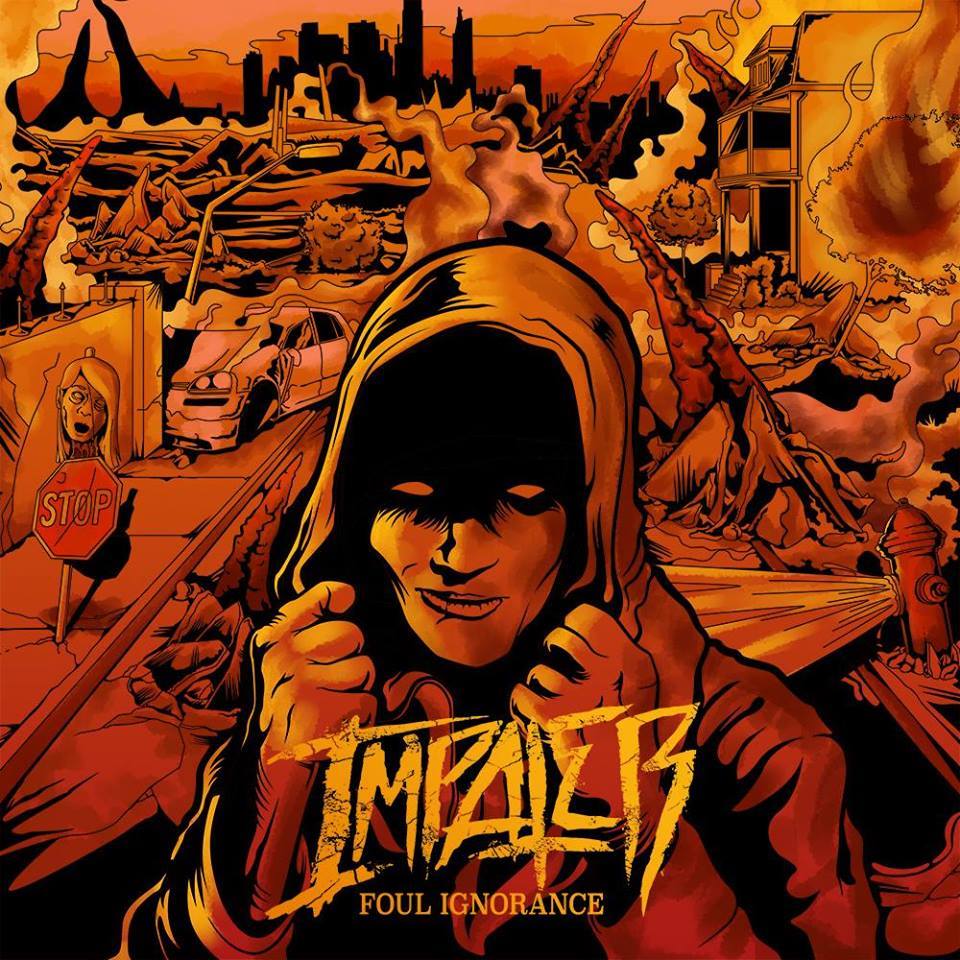 Sometimes, there is accuracy and beauty in simplicity. Let’s take a certain Perth-based punishing beatdown deathcore quintet, Impaler. Short, to the point name with an equally pointed style of brash, brazen beatdown aggression—muddled with murderously heavy and masterfully produced deathcore. Their latest EP, Foul Ignorance, is a stellar example in excellence found through simplicity. This group of grotesquely angry and bitter musicians attack the listener with a single purpose: to incite violence in any way possible—whether it be through bone-busting breakdowns or skull-splintering slams and beat downs, Impaler hold nothing back, skewering the listener on a pungee stick of pure hate, letting them bleed out as Foul Ignorance serves as their dying hymn.

Foul Ignorance is a furious chimera that takes on a different distinct sound for every track—giving certain songs a more blunt and beatdown vibe, while others are bouncier and heir more towards deathcore and groove metal stylings. Impaler—while favoring simplicity above superfluous frills and fanciness—still give plenty of musical variety to keep the listener engaged. Drummer Steve Askwith is an excellent example and the source for a majority of the band’s dynamism. “Foul Ignorance” and “Look Hood” are examples of his faster and more complicated patterns—with fleet footwork and flashy fills to keep the songs moving. However, “Kill Bill” and “You Know” are examples of more straightforward, brash beatdown anthems—sparse with fills and technicality, and laden with low, filthy interplay between Askwith’s aggressive drumming and bassist Jordan Leaver’s lurid grooves. Leaver and Askwith provide a fantastic low end for Foul Ignorance, giving plenty of beef to the crowd kill-friendly portions of chug-driven mayhem, while still moving smoothly and quickly to keep the album from dropping into monotonous territory. Atop Askwith and Leaver’s foundation of furious musicianship, guitarists Joel Ash and Ryan Costello bounce hither and to with grooves, chugs and energetic riffs aplenty. Ash’s leads are low, but frantic, with “Foul Ignorance” and “Disposapien” showcasing the occasional jarring harmonic or insidious groove that captures the listener’s attention. However, more often than not, Ash’s guitar harmonizes with Costello’s to form a crushing onslaught that leaves the listener flattened beneath a dense layer of dissonant, deep chugs.

Atop a canvas of instrumentation that roams from heavy to heavier and ending at heaviest, Foul Ignorance is a comprehensively crushing display of downtuned mastery—and it only gets better with the vocal prowess of frontman Corey Baker. Baker had mastered a variety of vocal tones—relying mostly on a meaty, visceral bellow but ranging into high screams—to give Impaler a voice excellent enough to compliment it’s instrumentation. Accompanied by two solid guests that give a distinct sound to their respective tracks, Baker dominates during the beatdown-styled song “Kill Bill,” just as he reigns supreme with screams and shouts both during the catchy portions of “Disposapien.” Baker’s vocal talent adds considerably to the release as a whole, ruling with ruthlessly heavy yells, screams and shouts that are still intelligible enough to understand—making sure that listener’s know exactly what Baker is saying during every song.

While you may be quick to write off Impaler as another heavy/downtempo/beatdown band, they are much more than that. Providing constant, punishing pressure and low, lacerating breakdowns without ever becoming truly “downtempo,” the band take traditional hardcore and throw it in a punching bag, whaling on it until it has a distinct beatdown seasoning–only to toss it in a blender with early Deathcore influences and set it on high. The result? A delicious smoothie that goes down like milk but rots the listener’s insides like arsenic—a thoroughly angry and aggressive release that sparks a destructive streak in the listener that stands ferocious enough to level entire cities and skewer their inhabitants.

For Fans Of: Rex, Genocide District, Sanctioned, Tomb of Doom