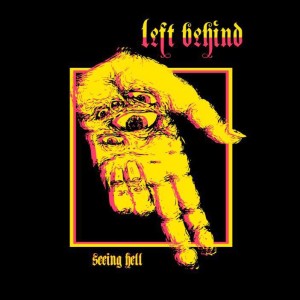 Everyone encounters a moment in their lives where everything changes—an event that strips them of youthful innocence and obliterates nostalgia’s rose glasses. From that moment on, your life is no longer the same: your interactions with others and the world around you become different, more measured and aware of how they impact others.

For enthusiasts of heavy music, Seeing Hell will undoubtedly be that moment.

A psychedelic and twisted clash between contemporary hardcore and traditional, thrashy metal, Seeing Hell is Left Behind completely moving on from the sound they developed on their debut EP, Death, Take Me and embracing a much more bleak, nihilistic and entrancing sound. There is no shortage of ways to try and explain how Seeing Hell affects the listener, but the easiest way is that, simply put, Left Behind’s debut full length is an experience that every fan of hardcore, metal, or heavy music in general should experience.

Seeing Hell is one part brash, bare-knuckle hardcore and one part riff-driven, thrashy metal—with dashes of hypnotizing hallucinogens and punchy, fast-paced punk. Left Behind walk a careful line that serves as a border between these genres, drawing plentifully from both without committing themselves to either side—and because of this, Seeing Hell is an extraordinarily diverse record that never seems to get old. Percussionist Zak Rea serves as the band’s unbreakable backbone, a malleable spine that oscillates between punishing, punctual percussion on “Headhunter” and “Rock Bottom” to airy, atmospheric drumming on more experimental anthems “Convulse” and “Vexed.” Rea’s speed and flashy fill work on faster-paced tracks is simply ruthless—see “Snakes” and “Gag”—while his softer and more ethereal playing on the album’s mellow moments truly draws the listener into a trance, especially with the assistance of Cade Lewis’ catchy bass grooves. Where most hardcore and metal releases have (at best) a lack-luster place in the mix, Lewis’ lurid, grimy tone stands out throughout the duration of Seeing Hell, lathering every breakdown and riff in a thick coat of grit and refuse. “Convulse,” or the release’s titular track are both stellar examples: Lewis’ bass paves a battered, barren path for guitarists Jordan Lorea and Bryan Rea to fill with chaos, dissonance—and of course, enough riffs to sink an aircraft carrier. Lorea and Rea’s fretwork is where Seeing Hell truly earns its status as a legendary hybrid between hardcore and metal. Tracks like “Headhunter” and “Snakes” feel distinctly more “-core” than anything, where “Convulse” is a trip—dragging the listener through vivid, almost nightmarish soundscapes that truly has them seeing Hell. Loreaand Rea are at their most diverse during “Vexed” and “Seeing Hell,” where the track ebbs and flows from furious speed to fuming, bitter atmosphere.

If Left Behind’s musicianship mirrors a journey through Hell’s intolerable heat and bitter cold, the band’s vocal element serves as the frantic—bordering on insane—ramblings of a man who has survived it. Frontman Zachary Hatfield—assisted by Bryan and Zak Rea—takes the listener on a tortured, tedious trek through Hell itself. Diverse and intelligently written lyrics smother the listener, delivered through everything from harsh, hefty roars and bone-chilling clean vocals. “Headhunter” and “Snakes” are more unusual tracks, lyrically, drawing influence from Hatfield’s issues with today’s heavy music scene—where “Rock Bottom” feels almost as if the lyrics could come from an ancient blues record. All the while, Hatfield’s vocal element is simply monstrous, with mid-range screams dipping into gritty, grisly lows and odd, almost off-putting singing (courtesy of the Rea’s). Simply put, Hatfield et al’s vocal approach is the magnificently varied icing on the bizarre-yet-brutal (and likely rotted) cake that is Seeing Hell.

In a time where most bands are satisfied just putting out “some songs” as an album, Left Behind beg to differ. Seeing Hell is a loosely conceptual-yet-overwhelmingly engrossing experience of an album that makes raw metal more appealing for today’s breakdown-loving, spinkicking youth and allows hardcore to seem less trendy to veteran metal elitists. It is a true bridge between to the two musical styles, standing strong over occasionally troubled waters. If “Vexed” doesn’t convince you, “Seeing Hell” or “Twelve Gauge” might—and if those don’t, then you need to get your ears checked. Well worth the wait and more than substantive enough to live up to the band’s well-earned hype, Seeing Hell is an experience that will leave your eyes blind and your ears ringing, perhaps never to fully recover.