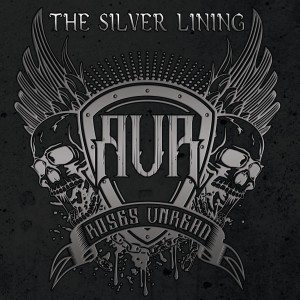 Weather – it can be the most beautiful, yet equally deadly thing on the planet. One moment, we can see the sun shining in a sea of blue. Seconds later, we can see a wall of rain, lightning and gusts of wind. Through those heavy, ominous, black clouds we can see just the tiniest speck of light. Thus, the metaphor “every cloud has a silver lining” is born. Such is the way of life, too. Life throws us the most difficult situations to get through and, at times, it feels like we’re fighting a losing battle. However, through a positive mind frame, we can overcome anything. TN’s Roses Unread want you to hear about their struggles in life, as a band and in general through their latest album The Silver Lining. This album is filled with songs from different walks of life that will remind you that, no matter how bad it seems, you can always pull through. You’re never alone. This album boasts a new, revitalized sound from them, seeing the band head in a more alternative metal direction, rather than the hard rock sound we’ve heard in the past. A bold move, as the sound they had created before worked so well for them. Expertly, though, they pull this new sound off, making them bigger and better than ever!

The band’s heavier sound makes it harder for them to be pigeon-holed into one genre. Effectively, this will open all types of new doors for the band, as they’ll fit into both the rock and metal categories at this point. The most surprising thing about this new sound is that they’re incorporating screams into their music. These are perfectly placed and, depending on the song, are either individual or a mixture of the male members of the band, blended together. They’re not dry or boring, they add character to each track and kind of give a demonic contrast to vocalist Allison Teague Purifoy’s angelic vocal styling. Rather than creating an instrumental track to serve as an intro, they decided to blend it into the beginning of the explosive “Crash and Burn.” We start off with a slow, subtle and beautiful clean electric guitar riff. Little by little, we’re built up, first with drums from Grant Brooks, followed by added distortion from guitarists John Crickle and Blake Becton with an underlying layer of bass from Brant “The Beard” Sollis. The intro is reprised by the full band, abruptly stopping and launching into the opening riff of the track. The track remains pretty heavy throughout as Purifoy sings about how we all strive to be something in life, just hoping that we won’t succeed to fail. It’s a track that sets the theme for the album. We’re also met with the first of the screams on the album, from this track.

The track “Never Enough” has a lot to say in it. It’s a track that seems equally centered on a destructive relationship, while also seemingly focused on the feeling of hopelessness. This is a track that will especially resonate with anyone who has ever felt like, no matter what they do, it’s never good enough. All you want to do is make your loved ones proud, to make your enemies regret the things they’ve done to you and to prove anyone who has ever doubted you wrong. It’s a track that teaches you that it’s okay to feel that way but, in the end, you will find a way to persevere and show that the sky is the limit for you. Paint yourself in a positive light and let those who are in the darkness continue to think whatever they want, they will see what you’re made of in time. Nothing pushes you farther than the hunger to prove yourself. Never let yourself think you aren’t good enough.

The next track I want to talk about is track number 6 on the album, “Excuses.” This track is one that hits me pretty hard on an emotional level because it focuses on the darker points of a poisonous relationship. It’s likely you’ve been in a relationship where, no matter what you do, you can’t seem to keep yourself from taking them back. No matter how many times they’ve lied to you, how many times they’ve wronged you, you just can’t let go. This is a track that teaches you to stand up and say “enough is enough, either you make a change or this damaged relationship will be severed for good!” It’s a track that hearkens back to their older sound but still manages to stay fresh. While there’s nothing extraordinary about the musical aspect of this track, the lyrics will certainly catch your attention.

If ever a track needed an aggressive, growled introductory scream, it’s certainly “Basilisk.” No – this isn’t a Harry Potter reference, so don’t get your hopes up nerds of the world. This is possibly one of the heaviest tracks on the album and, with the title that it has, you might expect no less. This is a track about putting your hope in someone, hoping that they’ll wise up to what they’ve been doing wrong. In the end, you realize that they won’t change and you have to make a decision. The decision here is to let go of that person. I can see why the title was chosen, as Purifoy sings repeatedly of feeling frozen, hoping that this person will make the changes they need but that this poisonous relationship has caused too much damage and ties need to be severed in the end. I can’t tell and don’t really want to speculate but it certainly seems like this track is directed at, either a former member of the band, or someone really close to the band. The tip-off to that is the lyrics “We waited and waited and finally see, you can’t be the man we need you to be” and “It’s your own damn fault, and that’s just that!”

Scientific research shows that people tend to lose interest after about 4 minutes of a song, so it’s risky to create a song that is any longer. However, if done correctly (see Between the Buried & Me, Periphery, TesseracT, etc) they can be a journey through an aural soundscape. Roses Unread has tried their hand at this idea, with the final track on the album “One Eye Open,” which clocks in at exactly 7 minutes. Much like “Crash and Burn,” we start off with an instrumental intro on this track. The track moves fluidly along slowly until it hits a killer guitar solo about 5 minutes in. The track is overall very atmospheric and really closes out the album perfectly.

The Silver Lining, which was partway fan-funded through Indiegogo, is more than just an album. It’s an emotional reminder that, though we may never know what’s next in life, we’ll always have something to look forward to on the other side. It’s an album that kept the fans in mind, mixing both old and new sounds to create something vibrant and beautiful, while also taking a heavy turn, adding an edge to it. This album is going to open them up to a whole new market of fans, shows and opportunities. The most impressive part of it all is that each of the 14 tracks you hear on the album was created in the band’s home studio. That being said, you can hear a bit of muddiness in the mix at times but it’s overall a very professional sounding record and proves that they know what they’re doing. Do yourselves a favor and pick up your copy of The Silver Lining, out now! For a physical copy, just shoot the band page a message and they can work it out with you or pick it up on iTunes, Google Play or AmazonMP3 using the links below. Remember, for every black cloud in life, there’s a Silver Lining.