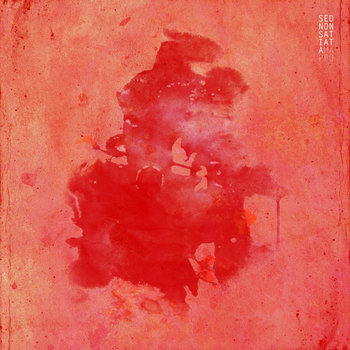 It is an egregious error to confine Romanticism to any time period. That is, to say that the 19th century birthed Romance assumes humanity felt nothing for most of history until some European guys wrote emotions into the picture. When in actuality each era, each people, each group (be it ethnic, religious, or musical) possesses its own Romantic. For those 19th century European dudes and dudettes lyric poetry, sweeping naturalistic paintings, and folk-inspired orchestral movements kept them teary-eyed at night, full of what we might call the “feels.” Nowadays, while Romantic visual art and poetry still make many of us blubbering fools, Romantic music isn’t exactly kleenex friendly material. Not many people can say they’ve cried in the throes of Schubert or Rossini (though you may be surprised by the emotional power of their music, check it out). Very few musicians embrace a new way to express the Romanticism of the 21st century, but french screamo legends, Sed Non Satiata capture the Romantic in a way that demands our attention. So, pull up a chair, stop acting all macho and treat yourself to Mappõ a shining example of millennial musical Romance.

Sed Non Satiata blew up the screamo scene in 2005 with their split with Aghast. Their blend of heart-rending screamo by the book and adventurous, post-rock inspired instrumentation had every awkward Midwestern teenager star struck by a band they couldn’t even understand. That’s right, Sed Non Satiata bellowe their songs in their native French and still, amazingly, manage to captivate a huge English-speaking audience. This is by no means rare considering how prolific the Eastern European, German, and French scenes have been throughout the 2000s but, Sed Non Satiata hit the scene harder than any other Euro band. Let’s face it, with a Charles Baudelaire quote for a band name (roughly translates to “But She is Not Satisfied,” from Baudelaire’s Fleur Du Mal poems, old guy Romanticism at its best), a distinct lack of networking ability (for that underground feel), and an emotional force equivalent to a two ton truck in free fall, Sed Non Satiata are every emo kid’s dream. Mappõ only adds to the undeniable appeal of Sed Non Satiata, a flowing and crashing masterpiece of the genre that will undoubtedly make every fans album of the year list.

Mappõ opens with what sounds like a post-rock climax, soaring guitar echoes foregrounded by destructively dissonant chords, but quickly subsides into a melodic interlude, all the while punctuated with anguished screams. The first 20 seconds of the album give a tantalizing taste of the peaks and valleys that riddle Mappõ. Song after song, the band skillfully juxtapose the emotional deathgrip of their vocals with the light fingers of their uplifting melodies and inspired climaxes. It’s no wonder that a growing American fanbase shrug at their inability to understand the words Sed Non Satiata scream. It almost doesn’t matter what you say when you present it that artfully.

While other screamo bands struggle to transition from the hardhitting EP format to full length releases, Sed Non Satiata handle it with ease. Mappõ never bores the listener, it flows so wonderfully both within and between tracks that it feels like a single comprehensive piece of music (as an LP should). Sed Non Satiata inhabit this record comfortably; they avoid revealing all their tricks too early but also don’t reserve themselves for too long. Each interlude, each crushing breakdown, each heartwrenching howl lasts exactly as long as it should, filling the space it needs to before giving way to the next section of the song. Sed Non Satiata exhibit not just a mastery of their craft on Mappõ but also, an acute understanding of song structure, arrangement and the experience of the listener.

Sed Non Satiata’s version of the Romantic is crushed yet hopeful; idealistic yet realistic; sweepingly majestic yet intimate. All of Mappõ stands as a testament to the emotional power of lovingly crafted music. So next time you think Romance is dead, check yourself, go find a dark room and bask in the power and grace of Sed Non Satiata’s Mappõ. I promise, you won’t be disappointed.