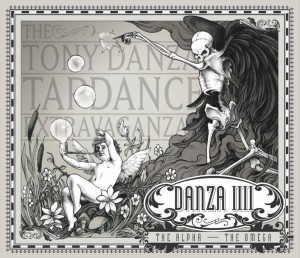 Not every band with more than one release really has a “career.” Sure, every member in the band might be doing it for their full-time job (and it definitely beats a good ol’ nine-to-five), and it might be their full source of income, but that doesn’t necessarily make it a career. While there might be plenty of releases underneath an artists’ belt, what differentiates them between “albums” and “a career” is cohesiveness–something many bands lack, but The Tony Danza Tapdance Extravaganza possess. With their most recent and final outing, Danza IIII: The Alpha – The Omega, these Tennessee-based titans of mathcore have pushed through years of practice and refinement to provide a dense, chaotic, yet marvelously ethereal and youthful blending of mathy hardcore and groovy deathcore.

The Tony Danza Tapdance Extravaganza aren’t a band for easy listening–really, they’ve never been a simple or superficial band. Instead, their albums have always been tightly-packed, intimidating stalwarts of instrumental proficiency and labyrinthian songwriting. Danza IIII is both the same and different. While there is still extraordinarily densely-written and tightly-packed chaos, it’s more spaciously arranged, with more room for the individual elements of each track to blossom. To put it simply: Danza IIII is much more accessible than any of the other albums The Tony Danza Tapdance Extravaganza have released before it. Tracks like “You Won’t” and “Rudy x 3” sound like B-sides from Danza III (maybe even with a little Danza II flair), while interludes like “Death Eaters” and “Some Things Are Better Left Unsaid” are new additions to the band’s dynamic, allowing the listener to stop and take a breath before plunging once more into they fray.

Speaking of dynamics, there are many, many parts to the illustrious methods by which Danza IIII has become a mathcore masterpiece. The guitar and bass are chief amongst them. While they rip along with the same feisty roar that one would expect from The Tony Danza Tapdance Extravaganza, they have taken on a much groovier and co-operative tone. Where the bass rumbles deep and slow, the guitar fills in the blanks, coloring the sky with all sorts of speedily played riffs and jarring harmonics. However, when the guitar dives into a ground-breaking, earth-trembling groove, the bass moves above it, with poppy, high-fretted riffs and fills that seem to come out of nowhere, sucker-punching the listener. “You Won’t” is jam-packed with moments like these, which provide a new-and-improved take on The Tony Danza Tapdance Extravaganza’s tried-and-true methods for grabbing the listener by the ears and holding them there.

Vocally, Danza IIII is far above any of the band’s past releases–this is without a doubt. “The Alpha – The Omega” is a simply jaw-dropping demonstration of The Tony Danza Tapdance Extravaganza’s vocal and lyrical prowess. Furthermore, the album’s title track is also a sublime demonstration of the vocals and the instrumentation working together to create grimey grooves and decimating breakdowns while all the while not become over-djenty or chuggy. Again–it becomes a matter of dynamics. The vocals bring a much-improved renovation on The Tony Danza Tapdance Extravaganza’s previous styles and writing which both makes Danza IIII a standout album in it’s own right, but also serves to “complete” the band’s discography. If it weren’t for Danza IIII’s remarkably dynamic sound, the band would not have the same amount of cohesive, comprehensive styling it does now.

So whether you were a fan of The Tony Danza Tapdance Extravaganza’s older material, or you’ve just heard this band’s long-winded name for the first time, you couldn’t have picked a better album to start with. Roaring guitars and pounding bass attack alongside vicious vocals to create a groovy, violent, lachrymating album which would serve as a perfect exodus for any band–let alone a band which already has so many stellar releases.

For Fans Of: Sworn In, Oceano, Ion Dissonance, Botch, KillWhitneyDead