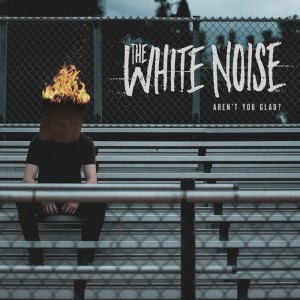 LA’s The White Noise are a horse of a different color in a scene over-saturated by cookie-cutter bands. Formed by 5 individuals with an unbridled passion for aggressive music, they’re slowly taking the US by storm. Their debut EP Aren’t You Glad? is a must-have for fans of aggressive music, not only for how visceral it can be but for everything that surrounds it as well. Read on to find out just WHY you should spend your money on this band!

“The Doctor Will See You Now” is a track that, to the passive listener, may seem like an intro but this is far from the case. Even though it clocks in at just over 2 minutes long, the band more than proves their worth through this explosive opener. Beginning with a haunting chant of “I’ve never felt, I’ve never felt, I’ve never felt like this before…” it lulls you into a false sense of security. You start to think to yourself “this EP can’t POSSIBLY be very heavy with an opening chant like that, can it?” You’re quickly proven wrong as this small ember of vocalist Shawn Walker’s melodic ability quickly grows into a full-blown wildfire.  The best part? This is only the beginning…. we’ve still got 6 tracks to go! While the band describes themselves as aggressive rock, you can clearly hear some post-hardcore and even metal influence, through this track alone. Of course, if you’ve been following the band from the beginning, as we have, you’ll know it gets so much better.

The aggressive side takes full reign as “Bloom” hits your speakers. This is the single that started it all for this LA 5-piece, coupled with the huge news that they had signed with Fearless Records. Showcasing a little bit of everything that these guys have to offer, it thrashes along for nearly 4 minutes. This is where we get to hear a bit of hardcore influence in the instrumentals surrounding the verses. Moreover, this is the most aggressive we’ve seen the band get to date. I’ve heard from several friends that this track, in particular, gets crazy mosh pits started. We can’t forget about the harmonies between Walker and guitarist David Southern, which are a stand-out throughout the entire album but really shine here.

“Picture Day” could be described as the band’s most anthemic track. Catchy chorus, wonderful hook and just the right amount of aggression are what make this one of my favorite tracks. The lyrics, centered around a relationship that ended on bad terms, are definitely something that jumped out to me. This isn’t your typical “you did me wrong, I hate you” brooding type of break-up song. The only song I’ve heard that I could compare as hard-hitting, lyrically, is that of Bullet For My Valentine’s “Bittersweet Memories” which is perhaps one of my favorite songs on the subject.

The infectious riffs in the chorus of “Red Eye Lids” still haunt my sleep… and I’m not the least bit perturbed by it! Seeing the band teeter between melodic hardcore and post-hardcore is something that is very interesting. There are a couple of screamed vocal parts that remind me of Beau Bokan of labelmates Blessthefall. Does that mean that they’re copying another band? This is just a simple comparison that I draw… the duration of the track is filled with the perfect mix of aggression, angst and melody. Truly focusing on their aggressive side has become an art at this point, though.

“Brainwashed” is the most melodic track on the EP, without a doubt. Therefore, if melody is your thing… this will be your go-to. Oddly enough, though, it’s the instrumentals that you’ll find yourself drawn to here. The drums have just the right amount of punch, sounding nice and full… proving that drummer Tommy West was given plenty of room to breathe. The guitar riffs, provided by Southern and Josh Strock, are bright and bouncy and bassist Bailey Crego rounds it out with a nice, full bass-line.

We’ve come to the end and, while most bands would settle on a slow, subtle end. The White Noise isn’t one of those bands. “Cosmopolitician” is punchy and aggressive, giving you just enough room to breathe with the chorus before continuing the onslaught once more.

It’s clear to this reviewer that The White Noise has a bright future ahead of them. Their first tour, with labelmates Get Scared and Chunk! No, Captain Chunk!, along with Sumerian Records powerhouses I See Stars and Palaye Royal was wildly successful and only serves to prove the intense presence that these guys bring to the stage. What’s next? Well, how about starting off with a newly-announced tour with Enter Shikari and Hands Like Houses! Tour dates/flyer below but be sure to pick up your copy of Aren’t You Glad, out on Fearless Records now, using the links below! 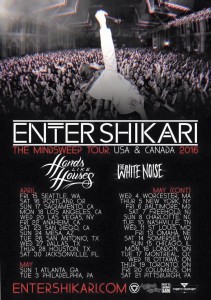