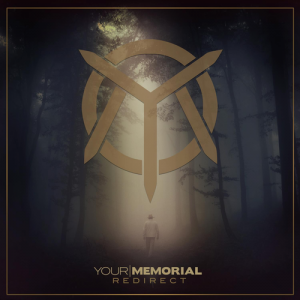 In an era where so many bands release albums with nonsensical titles and track names, it can be tough to glean what exactly the band is trying to impart to the listener. Sure tongue-in-cheek remarks and gimmicky puns are great for drawing attention and catching one’s eye, but more often than not, there is no meaning behind the content. It falls flat, failing to leave a lasting impression on the listener. Your Memorial’s latest effort, Redirect, however does just what its name would imply–it refines, focuses and indeed redirects the band into previously uncharted realms of overlapping harshness and atmosphere.

Redirect is much like a voyage through space. At times, tranquil and delightfully stagnant, the album is glued together with bits of post-rock styled elements used as interludes. These interludes function as spacious, luxurious gaps between the hard-hitting elements of the release, which line up like a sequence of asteroid belts. Pelting the listener with aggression and passion in the form of grinding, groovy breakdowns. This Twin-Cities based metalcore quartet brilliantly fuse melodic, lighter segments together with crushing, climactic heaviness, topped off with sparse–but tasteful–instrumental sections to create a listening experience which places the listener in the passenger seat of a voyage into a galaxy created by the tedious and careful amalgam of precarious elements.

The grandiose nature with which Your Memorial–and the listener–disembark upon the journey that is Redirect is subtle. As the album opens quietly with a sample and some ambient sounds, the listener is given just enough time to buckle their seatbelts before they are thrust into the album’s title track, “Redirect.” From then on out, the album is a bumpy ride, dragging the listener along–albeit willingly–through tracks which hit both heavily and melodically in a left-right fashion. “Eternity” and “Trial and Triumph” showcase this facet of the album most efficiently. “Eternity” starts with a bang, but features an almost needed break from the heaviness about half-way through, where the vocals disappear, and the smooth guitar and elegant drumming are permitted to shine. “Trial and Triumph” functions almost in an inverse manner, building up to a stunning, climactic midpoint packed with both tasteful, clean vocals (which are a more frequent appearance on Redirect than their past efforts, but are done so well, one almost wonders where they’ve been this whole time) and heavy, crushing chugs that simultaneously kiss the listener on the cheek while punching him or her in the jaw.

In this manner, the nature of the entire album follows the same structure that many of the individual tracks follow. Opening with a deceptive calm, building up to a breath-taking climax, and slowly–but barely–descending to a calming conclusion, Redirect takes the listener on a slightly linear but completely enjoyable journey. The album not only is a stellar collection of individual songs, but a behemoth of an experience which begs to be listened to as a whole–something that cannot frequently be said for a metalcore album. The touches of spacial atmosphere, hints of post-rock, “djent” and groove that are sprinkled throughout the album, along with the welcome niche the clean vocals have found themselves save the album from what could have been it’s great undoing–monotony. While it is a masterful creation, it is a long album. Long, however, should not be mistaken for overbearing or obtrusive, as Redirect is just long enough for the listener to find themselves lost in, without begging to find their way home.