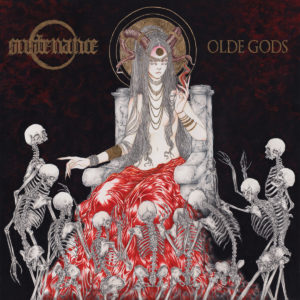 A lot has changed since last we heard from metalcore outfit, Sustenance. A band that started with a punchy-but-painfully-predictable metalcore sound, morphed into a pseudo-progressive juggernaut with N.U.P. and almost faded into darkness, this outfit has done wonders in keeping the underground heavy music community on their toes. So, it only seemed natural to wonder that, with their return, what would we be seeing from them? A deeper dive into the technicality that lingered on segments of N.U.P.? Maybe a segue into more sinister, polished and heavier territory? Maybe an altogether genre switcheroo?

Maybe none of the above, it seems, as Sustenance have gone back to their roots and dug them up, presenting us with gritty, dirty, raw, old-testament aggression. Olde Gods is…just that—a testament to the type of Gods that murdered and pillaged to establish a kingdom and loyal following. It is just about a half hour of dense, devastating metalcore that draws influence from all sorts of styles, spanning black, doom, sludge metals into ride-bell laden, raunchy and bouncy modern-but-really-revival-wave metalcore. The take-home message is that Olde Gods is a little bit olde school, with just enough new punch and power to the production and songwriting to make it feel fresh and full of life.

Instrumentally, Sustenance trade in their previous style of polished, bouncy and groovy metalcore for something that takes on a darker and much more metallic hue. Together, Andrew Schultz (guitar, vocals) and David Boughter (percussion) create a dense, devastating juggernaut of a release that uses everything from thrashing, intense riffs and leads to pummeling breakdowns to beat the listener into submission. “Songs of Sin,” the record’s opening number, is an excellent example of this—starting with subtlety and building into a raunchy display of power, Boughter and Schultz are positively ruthless, creating a song that weaves elements of near-“cvlt” metallic influence into a backbone of bold, bare-knuckle hardcore. “Goddess” is similar, as is “Derived,” highlighting diversity and variety when it comes to the band’s plethora of influences. Other songs—“Sol” among them—offer a mellow and introspective break, with instrumentation that draws more heavily from melodic death metal and post-metal. The point is that the duo are outrageously talented, with Boughter’s drumming being neither too technical nor dull, instead striking a careful balance between outright aggression and tactful, pocket-friendly percussion. Meanwhile, the band’s fretwork is akin to a wolf’s gnarled maw—with many songs highlighting teeth sharp enough to rend flesh, while others are a more placated offering, featuring dulled teeth and hardened gingivae as opposed to razor-sharp incisors.

Given Sustenance’s line-up change, it’s only fitting for the band’s vocal element to take on some flux. Schultz is now on vocal duties, and to terrifying effect. If “Goddess” isn’t proof enough for you, then fear not—Olde Gods is home to no shortage of shiver-inducing examples of Schultz’s unorthodox vocal prowess. Songs like “Without Sentiment” are an excellent example of his ability to let loose lurid aggression without fear or failure, just as “Goddess” is. While Schultz might have a very distinct vocal tone—and it might be offputting to some listeners uninitiated in the more traditional styles of metalcore—it fits the tone abundant on Olde Gods without missing a beat. Raw and primal, Schultz roars throughout the entirety of the album, using grisly lows to offset his harsh mid-range yell where appropriate, adding intensity to some sections of Olde Gods that were already plenty climactic.

Olde Gods is a big move for Sustenance, seeing the band opting to try to weave several subsects of extreme music together into a crushing sonic chimera. Those expecting a return to N.U.P. will be let down in that is a far cry from the polished polyrhythms abundant on that release—but far from let down in the final product. Cruel and crushing without remorse, Olde Gods is oppressive, a truly remarkable onslaught of primal metalcore done right.