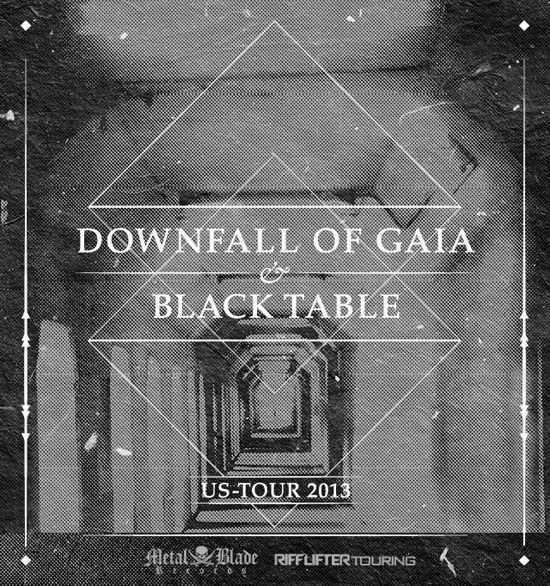 DOWNFALL OF GAIA will be returning to the states, with dates beginning on August 16th. The confirmed dates can be found below, as well as at facebook.com/downfallofgaia. More dates are still TBA, and will be made available on-line as soon as they are confirmed. Additionally, DOWNFALL OF GAIA has posted a video that includes footage from their recent European tour. The black and white, skillfully shot video can be seen on youtube HERE.

DOWNFALL OF GAIA‘s critically-acclaimed album, Suffocating in the Swarm of Cranes, was released in October of 2012. The music video for In the Rivers Bleak can be streamed at metalblade.com/downfallofgaia. The video was filmed by John Bradburn and Andy Paton and, according to DOWNFALL OF GAIA, was filmed “on a rainy English night and delivers in a perfect way the mood we tried to capture on this record. It’s completely filmed in black and white and it’s a view right inside the story of our new record.”

Additionally, a limited number of Europe-imported gatefold double LPs are still available. Check them out at indiemerch.com/metalbladerecords.

“Downfall of Gaia make a huge statement with what could be one of the finest post metal records in recent memory.” SputnikMusic.com – 4.5/5

“Pitted somewhere between modern psychedelic black metal and barbed doom of Neurosis, there’s a cold smother to Downfall of Gaia’s sound that envelopes you like an iron winter fog. With a pallet so rich in shades of grey, Downfall of Gaia have crafted ‘Suffocating in The Swarm of Cranes’ to be as evocative as it is desolate.” Terrorizer Magazine

“There isn’t a dull moment of this release, even the moody parts are fraught with tension as you wait for some sort of impending release whether it’s a hardcore crust beatdown or breathtaking black hued blasting peak, fraught with emotion.” TeethOfTheDivine.com