Held at the Boiler Room, a club owned by Drowning Pool drummer, Mike Luce, the Metroplex Heavyfest II will terrorize Dallas/Ft. Worth area with 11 bands of sheer heaviness over two nights, starting Friday, July 19, 2013. And set to take the stage as the main headliner on Saturday, July 20th, following the “just-released” debut album for Ripple Music, is EARTHEN GRAVE. 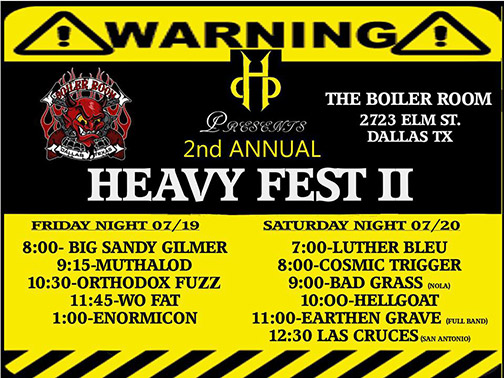 EARTHEN GRAVE’s self-titled debut finds the band unleashing a terror of groove-laden, classic metal and doom. Twin guitar harmonies sear through the riff-fest of pure darkness and post-Sabbath heaviness. “death is another word….” the first single off the album, is one of several bonus tracks exclusive to the Ripple Music re-release of the fully remastered EARTHEN GRAVE debut, appearing on both the CD and double-LP versions of the album.

Following a triumphant appearance at the Days of the Doomed III Festival, Earthen Grave and Ripple Music team up to let loose the doom/metal beast on July 9th through Nail Distribution, Code 7, Clearspot, and the Ripple Music Store.

“death is another word…” is available as a digital download at ripplemusic.bandcamp.com.

The Earthen Grave re-release is available on vinyl and CD at www.ripple-music.com.

EARTHEN GRAVE’s Ron Holzner is available for interviews regarding EARTHEN GRAVE, TROUBLE and THE SKULL. Those interested should contact ClawhammerPR@gmail.com for inquires.

Formed in 2008, EARTHEN GRAVE is a five-piece Chicago metal band that marries the sounds of metal past and future with a sweaty, pummeling live show. EARTHEN GRAVE boasts an undeniable collective metal and musical pedigree. Each member is an accomplished musician and a veteran of the metal scene, including Ron Holzner who was a member of the seminal and seismic doom pioneers TROUBLE – a band widely regarded as one of the most important unsung American metal bands of all time. In addition, EARTHEN GRAVE has that “extra something special” with occasional guest 6th member live and boasting a Full collaboration on the new release with Rachel Barton Pine. Rachel, a world-renowned classical violinist brings her frightening classical chops to a relatively new instrument, the Viper.

Originally released in 2012, EARTHEN GRAVE’s self-titled debut features 10 tracks of blistering Doom and Metal that left the critics grasping for superlatives. Terrorizer Magazine hailed “… EARTHEN GRAVE sounds old school without being retro, managing to go through every element on which lesser bands usually fail with exquisite grace and solemn subtlety…” Now to be reissued through Ripple Music, the new edition of the album, produced by Ron Holzner, has been completely remastered with four bonus tracks including the new song, “death is another word….” with new drummer Chris Wozniak (LAIR OF THE MINOTAUR).

“…they take the Black Sabbath/Pentagram/Witchfinder General formula to another level by adding in Pine’s lovely violin work, which gives these crushing songs an almost Kansas-ish feel to them in spots. 4/5”– Sea of Tranquility

“…the integrity and honesty of the musical endeavour shines through, making this a thought-provoking, melancholic metal creation with some real magic…” – Zero Tolerance

“…a modern doom metal classic that will live beyond a mere best-of-the-year bestowing. 4.5/5”– Metal Underground