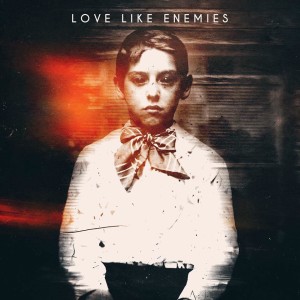 Adversity: Everyone faces it, everyone deals with it and everyone gets through it. However, it can be much more difficult facing adversity in a band. Constantly being told you aren’t good enough, you’ll never amount to anything, you’ll never make it past that practice space… these are common things that those in bands hear day in, day out. However, a Fort Myers band by the name of Love Like Enemies has overcome mass amounts of adversity to arrive where they are today. A 3-year culmination of hard work. A war cry made loud and proud through their blood, sweat and tears. The day that their debut, self-titled EP has finally gotten to see the light of day. They’ve thrown every ounce of their being into it and today, the world gets to judge how well they’ve proven themselves.

From my first listen of this EP, I was absolutely taken aback by how amazing Austin Kobie’s screams are, though, I’ll have to admit it took me awhile to get into Gabe Cintron’s clean singing. Written, produced, recorded, mixed and mastered at Voidspeaker Recordings by David Voidspeak… this EP will kick you in the teeth and pummel you relentlessly. It’s filled with aggression, breakdowns and the all-too-popular “blegh!” Don’t dare write it off as just another metalcore album, though because it’s anything but ordinary. Guitarists Kalup Gallegos and Nathan Love perfectly compliment one another, creating incredible harmonies while delivering nothing less than air-tight precision in their riff delivery. You won’t really catch anything flashy, in terms of solos or anything, though. That’s okay because this isn’t an EP that’s designed to be heard in that fashion. This is an album put together by 7 friends who love to make music, want to make a difference in the world and could only seek to do so with music. From the chugs and electronics that bring us in through “Newcomer” to every single note, lyric, beat, riff and bass line that is played expertly, it’s a solid listen through and through. As we’re relentlessly pounded with chug after chug through “Search Me Out” and the remaining four tracks on the EP.

Of course, it wouldn’t be a true metalcore album without a guest or two, right? Well, LLE have you covered as Ryan Kirby (Fit For A King) makes a bone-crushing appearance on the final track entitled, “Viewpoints.” Is this EP perfect? Well, truthfully, no. It’s the debut for the band, they did an excellent job and it’s a great listen. While there is still some naivete in the songwriting, as a whole, it’s clear that the sky is the limit for them. They’re refusing to give up and that is what will see this band soar to heights with the best in their genre with their debut full-length (currently being written/recorded.) The EP was a solid start and I’m extremely excited to see where they go next! Be sure to pick up your copy on iTunes or your favorite digital retailer today!