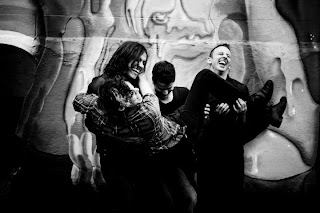 Well this week I had the pleasure to talk to the guys in NEW YORK RIVALS, an Rock/Indie group out of Brooklyn. The band has some great sounds and a lot of Nirvana and Smashing Pumpkins roots, and they just wrapped up their newest self titled album, and we’re stoked to talk with these guys! Lets get to it!

Dave: Okay, first of all, introduce yourselves, and give us a brief history of the band.

I’m Gianni and I play Bass

I’m Nash and I play drums.

We started the band about 5 weeks ago…Played a couple shows around NYC and caught the eye of our booking agent and here we are. On tour with The Lemonheads. It’s pretty incredible.

Dave: Where is the band name derived from?

Band: The last few weeks leading up to the forming of this band were pure HELL. I had my Bike stolen, Wallet Stolen, Got scammed for a Van and crossed paths with a really sketchy crowd of dirt bags. They made me sick of certain spots of the city because I was running into some of them so often that “NEW YORK RIVALS” seemed fitting.

Dave: I heard you guys just got done recording an album, tell us about that.

Band: It was amazing. We recorded half of it with MACHINE in NJ. He really helped us find a sound. He’s truly amazing, He can get the whole band hyped up in 5 seconds. He just makes recording fun which is really important. The other half was recorded in Brooklyn at Mission Sound with Jon Kaplan and Oliver Straus. That studio is amazzzzing. If your looking to record in NYC that’s the spot.

Dave: How was the writing process, given you guys are on the more experimental side?

Band: I(Josh) Write all the songs but everyone always ends up putting a cool/unique spin on it.

It’s a culmination of things.

They never turn out how we think they’re going to.

Dave: What are the bands inspirations, and each of your personal inspirations? for example, faith, politics, religious claims, poetry, ect?

Band: We are really new so right now we just want to stay on the road and not over think things.
We are just happy to be able to tour.
I don’t give a shit about the money.
Working a shitty office job will never happen for me whether this band makes it or not.

Josh: I’m inspired by all kinds of art and also culture. I find myself learning a lot while I travel and constantly meeting people that continually change my outlooks.

Gianni: Life inspires me. The ups and downs keep me grounded.

Erik: Mostly other bands and artists inspire to get better and constantly progress in my playing.

Nash: I’m gonna go with other musicians as well. When you play with bands that inspire you always end up walking away learning something new.

Dave: What kind of bands are you playing with? Are they mostly your genre? or a wide range of music?

Band: Right now we are on tour with The Lemonheads so it’s straight 90’s which is amazing because that’s our favorite era for music.

Other than that we have just been playing with anyone that will have us around NYC.

Dave: How do you feel about the term “generic”? And how does it seem to affect bands?

Band: It’s really easy for bands to rely on technology nowadays. It’s less personal and kids are definitely starting to catch on. Like all fads I think this will fade away. Music is in such a terrible place lately…I really hope that someone can bring good old rock and roll to the forefront and just plug in and play.

Dave: So you’re going on tour! Congrats! Tell us a little about that and maybe where we can catch you guys at a show!

Band: This tour has been amazing so far. We are still in the south right now and I must say these people are incredibly hospitable.

People have taken us in left and right.

It’s a good feeling for our first run.

You can find all the dates on @NEWYORKRIVALS and our Facebook Page.

Dave: What do you guys have planed aside from a tour in the fall?

Band: When we are playing shows we will be recording non stop.

I write ALOT so I’m always pushing to lay the ideas the down the second they are done.

My focus is on Touring but if we aren’t on the road Recording is the next best thing.

We’re also trying to get a music video done when we get back.

MACHINE for being such a killer guy. This band wouldn’t have happened if he didn’t take us in.

Hope you got what you need.

Thanks for your time!

Make sure to catch NEW YORK RIVALS on tour this fall!

* with The Lemonheads
^ with Sam Roberts Band, Zeus