Home » All Posts » Bands » INTERVIEW: This Is Hell talks about their new album, touring, and working with an independent label 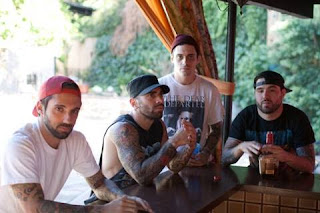 New York hardcore has always been in your face, diversified, and a one hell of a breeding ground for talented musicians. But for This Is Hell, they are by far one the most talented and well known NY Hardcore bands. Originating in 2004, they have quickly made a name for themselves and took the music scene by storm with their most notable release of Weight Of The World. Well, now they’re back and heavier and pissed off more than ever. Their new album, Black Mass, is their best and most impressive work to date and we here at The Transcendence got to have a word with Rick Jimenez ( guitars/vocals ) about their new album, tour life, and their view on the music scene today. Heres what he said!

The Transcendence: Well first off congratulations on Black Mass! How excited are you guys for everyone to hear it?

Rick: Extremely. We all feel like this is our strongest album and we’re dying for people to hear it and get to know it and bring the energy to these new songs live to match ours.

The Transcendence: What is the meaning behind ” Black Mass” and what made you guys pick that title?

Rick: The juxtaposition of whats evil and whats pure intrigues me. It is usually reversed in this world. How things are perceived and portrayed against what they really stand for and such. That was the motivation and meaning behind the title.

The Transcendence: It seems today that a lot of bands fall into this whole cycle of sounding exactly the same as every other band, what do you guys do, to maybe break that barrier and make your own sound?

Rick: We’re not poseurs and we’re not safe. Bands are now doing things we’ve done years ago but got shit for. This goes far beyond musical style too and to be honest it pisses me off. The music scene…fuck that, the music BUSINESS is such a frustrating thing. At the top of the frustration is the fact that there IS NOT SCENE and there is JUST BUSINESS. And yes, I mean that towards hardcore just as much as any other genre. Hardcore kids should know better but 9 times out of 10, they don’t. They’re the same consumer minded, trend following sheep as the indie dorks and the mall goers and the mtv viewers and so forth. Anyway, we pave our own way. We never reinvented the wheel, but we always did what we want, musically, lyrically, stylistically, tour-wise, artwork wise etc etc. We are who we are, and whether people like it or not, we’ve never aimed to please anyone aside from ourselves. Not many other bands can HONESTLY say that. They CAN say it, but they can’t HONESTLY say it.

The Transcendence: A lot of hardcore and punk bands write about their views on politics and religion. Where do you guys stand on those subjects and how did it affect the writing process?

Rick: I am an american. A proud one. But part of being a proud american to me means acknowledging faults, criticizing them and doing your part to change them. The race relations in this country is a joke and thats my MAIN concern when it comes to politics. I don’t wanna get too in depth on my views about our government and the parody of freewill and justice and democracy it has become because I will write a novel that contains to many “fucks” and “are you fucking kidding me’s?!” to be taken seriously via text. Religion and government is essentially the same; a hierarchy based on fear, blind service and subterfuge. I fear many things, but not the things either of those can bring forth. There are things I service but making the rich richer doesn’t fall under that umbrella whether their deity is god or government. The only Subterfuge i respect is my old hc band from the 90’s, not the act too often used by those in power.

The Transcendence: What is the biggest difference between Black Mass and Weight Of The World?

Rick: Lyrically Black Mass has a much broader view. There are recurring themes but Black Mass steps a bit further into the world of “lets do something about this problem” as opposed to “this problem is draining me”. Musically, its a leap in the direction that WOTW was a big step of. WOTW thrashed quite a bit more than Sundowning or Misfortunes, Black Mass thrashes around those two so hard they’d be left dizzy and lacerated. Everything is more in depth… vocals, guitar work, structure, production. I like to think of WOTW as our Kill Em All and Black Mass as our Ride The Lightning. Hopefully that means we’ve yet to write our Master Of Puppets… time will tell. And yes, everything in my life is based around Metallica and Wrestling analogies.

The Transcendence: How is it working with an independent label? Would it benefit you guys more to work with a major label? (example: writing process, recording, tours.)

Rick: Ugh, fuck no… unless that major label was about to pay my discover card bill, because in that case, fuck yes. For real though, the differences between no label, small indie & big indie are zero when it comes to writing process. That is a huge misunderstanding when it comes to people not in bands. People always think “you’re on THIS label now? Are you going to start sounding like “insert label band name here” now?!” Thats not how it works. No one from Trustkill or Rise ever had anything to say about “you should write something like THIS instead!” Where the labels do come in is paying the recording bills, actually pressing the cd’s and vinyl, marketing etc. Those things we’re extremely thankful for. That shit takes a lot of effort and is not cheap. For someone to have faith in your band or care about your band so much that they’re willing to put up money for you to record your songs and then make thousands of physical copies exist with the hope that they might sell and maybe make some money back… thats a big fucking deal. When we left Trustkill, people came to us and were all “so, you happy to be off trustkill? you mad at Josh? you think that dudes a dick?” Are you kidding? The dude spends his life putting up money and time so bands can create music and he’ll hopefully make his money back on his investment. Thats a huge deal. Same goes for Rise. Yeah, we don’t sound like a lot of the bands on the label. Who cares?! If anything, that means more to us because we feel like we are truly appreciated for what we are, not the clout/cred we may or may not bring or the amount of records we may or may not sell. Working with an indie means everyones gotta put in equal effort to make things work properly. We always put in 100% so we expect the labels we work with to do the same. I’m not sure what its like on a major label. I’ve heard horror stories, but I would never make a decision based on here-say. The thing i DO know is that they have a ton more money than most indie labels. I’m a 31 year old touring musician that lives in NY… which means I’m broker now than i was when i was 19 and not touring. If Frankie Sharpe from Sharpe Records offered me a large sum of cash right now so he could put out my record, so long as there was no one telling me what to do with my guitar, I’d have a hard time turning that down. If a stipulation was to have some yuppie dork “sit and work on some songs” with me, i’d probably give them one of the many variations of a suplex that i know before I told them to eat me.

The Transcendence: So you guys are on tour! Congrats! Tell us a little about the tour and what bands you guys will be playing with?

Rick: We’re on tour right now with Underoath, Comeback Kid and The Chariot. Shit is pretty cool. CBK are our good friends and the other guys are all new friends now. Its a different crowd for us, but thats something we’ve always done. We’ve always wanted to play to different crowds and with different types of bands. One of the many things we got shit for that EVERY band is doing now… backlash free of course. Theres barriers at the front of the stage most nights, which blows, but that makes the shows without barriers that much ore enjoyable. Why wouldn’t someone stagedive every second of their life?

The Transcendence: What is one thing you absolutely cannot live without on tour?

Rick: My ipod. I used to bring 2 books of 264 cds with me on tour. Now i bring 75,000 songs in my backpack… so i can ignore almost all of them and listen to nothing but Metallica and Megadeth. Weird right?

The Transcendence: How fun is it to just meet kids on tour and get to know your fans? Does it make you sit back and realize that you really ARE living the dream?

Rick: I was sitting at merch the other night and some kid came over and was just bullshitting for a while then bought a shirt and a cd. I was blown away… not just cause he bought stuff but by the fact that i’ve been doing this for 17 years and it STILL makes me feel amazing that anywhere, let alone out of the country sometimes, someone spends their hard earned money on not just coming to see my band, but then buying a shirt and a cd. I don’t ever wanna take that for granted.

The Transcendence: Anything you want your fans to know before we wrap this up?

Remember to catch This is hell on tour this fall with The Chariot, Comeback Kid, and Underoath! Hit up their facebook page to check the upcoming tour dates, buy their new album, and show these guys some love!