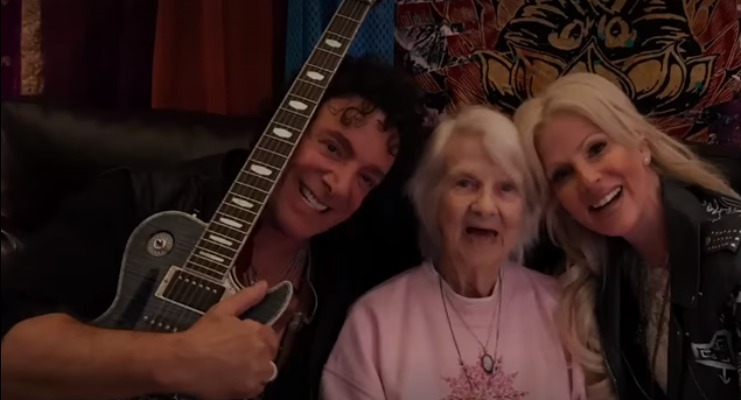 JOURNEY founder and only remaining original member NEAL SCHON and his wife, former Real Housewives D.C. star MICHAELE SCHON, are opening up their heretofore private lives to draw attention to the growing crisis of systemic elder care abuse in America. Originally revealed on Blast.com, the story of Michaele’s mother, Rosemary Holt’s, ongoing suffering at the hands of a broken legal system in Virginia is fast bringing much needed scrutiny to the critical social problem.
The evidence of insufficiency and abuse cited by the Schons includes frequent injuries, documented neglect, medical malpractice–including the administration of inappropriate and dangerous sedative medications–and untruthful reporting to the family concerning Rosemary’s care.

Several of those involved with the case, including guardian ad litem Elizabeth L. Wildhack, temporary guardian Paul W. Barnett (Arlington, VA), as well as those family members that are insistent that she remain in assisted living against her wishes, have been contacted by the Schons with the goal of mediating towards the best resolution for Rosemary. When contacting any of the above to discuss Rosemary’s future or to obtain any statement, all have declined, while Rosemary herself remains isolated at the facility. Unfortunately, until the Schons went public, there has been no willingness to address Rosemary’s desires for her future.

Finally, the Schons, despite providing all financial support for Rosemary’s care, are being blocked by the Court from seeing Rosemary, isolating her from all but a handful of family. She will not even be allowed to leave the facility to be with family over the Holiday season, further alienating and isolating her from most of her friends and family.

The couple has revealed that there is a major network documentary in process. “Saving Rosemary” will discuss the disconnected and profit driven multi-million dollar elder care business with the resulting abuse, neglect, and exploitation that is destroying the most vulnerable and fragile American citizens (for more on the elder care crisis in Virginia specifically, see USA Today’s article on Elder Care Abuse in the VA Nursing Homes)

The couple’s immediate goal is to obtain conservatorship of Rosemary in order to return her to the previous level of independence and dignity that she rightfully deserves, but also want to share their experience to create a meaningful dialogue about the condition of the American health care system.

Click on Image to Go to Video of Rosemary with Neal & Michaele prior to placement in facility, 2017

Journey star Neal Schon is helping his wife, Michaele Schon gain a conservatorship over her mother to take the woman out of a facility where they feel she is being given insufficient care.

Michaele, who is formerly a “Real Housewives D.C.” star, is trying to become the conservator over her mother, Rosemary Holt.

According to documents, filed by both Neal and Michaele, Rosemary recently fell in the parking lot and was hospitalized. During the hospitalization, the hospital made the decision to release her and file to appoint a temporary guardian (a lawyer connected to the hospital) to handle her care, and admitted her to an assisted living facility.

Michaele claims she wasn’t involved in the decision to leave her mother, and says that since being admitted she is now being held against her will and has developed severe medical issues. Included in the filing, Michaele claims her mother developed an sacral wound on her back that caused her to become delirious.

The documents, filed by attorney Troy Martin, ask that the Schons take over full control of Rosemary’s personal decisions and her estate. Neal and Michaele claim it has gotten so bad that she is “in a substandard and dangerous assisted living facility,” and claim “She has suffered lacerations and contusions at this facility. She is being denied dental care which has resulted in severe dental problems.”

The couple attached graphic photographic evidence of the injuries and sores, and also included photos of the 91-year old Rosemary sleeping upright in a chair and appearing to be in pain while laying on a couch. They say, “She is so uncomfortable in her room, she frequently sleeps on the couches or chairs in the lobby.”

She also says her mother was diagnosed with dementia by the hospital, but they believe she was just delirious from the wound, and cannot express the severity of the situation. In seeking to become a guardian, Michaele also explains she and Neal want to move Rosemary out to California.

The stars claim they’ve already been paying for Rosemary’s expenses and care, and have recently purchased her a home where they will pay the full cost of hiring a nurse and provide constant care.

However, we’re told the other members of Michaele’s family are supportive of Rosemary staying in the Virginia assisted living facility, so it appears the fight will have to be settled in court.

On November 18, 2018, the Schons were contacted by Rosemary’s long-time physician, Dr. Sia Sobhani, who had visited Rosemary in the facility that same day. At that time, he observed that she was being administered sedative / anti-psychotic medications that are not only inappropriate to her condition, but which are dangerous in regards to her current kidney function. Dr. Sobhani was alarmed and profoundly concerned about the long-term effects of the medications and immediately alerted them to the issue. Upon being informed of this, the Schons contacted the on-duty nurse, with several witnesses, to inquire about any medications being administered, and were told that Rosemary was only being administered Tylenol, despite Dr. Sobhani’s having witnessed the administration.

Police Incident Report Regarding Above Injury and Police Involvement

Individuals Associated with the Case

Who Is Judge William T. Newman?