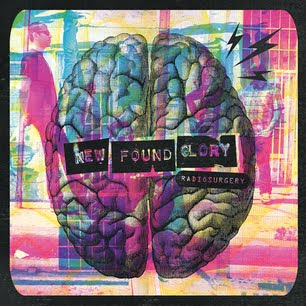 2. Anthem for the Unwanted
3. Drill It in My Brain
4. I’m Not the One
5. Ready, Aim, Fire!
6. Dumped
7. Summer Fling, Don’t Mean a Thing
8. Caught in the Act
9. Memories and Battle Scars
10. Trainwreck
11. Map of Your Body
If you’re a fan of the pop-punk genre, New Found Glory is all but a new name to you. With 6 albums under their belt, half of which were certified Gold by the RIAA, their 7th album, Radiosurgery, had a lot to live up to. However, they stepped up to the plate and knocked it out of the park! Not only did they create a fun and catchy album you will quickly get hooked on, but they also managed to pack a meaningful edge into the lyrics and overall tone. Radiosurgery is nothing short of a masterpiece. A 33-min roller coaster ride of emotions that takes you from the highest of highs to the lowest of lows. I’m very excited and honored to review this album for you all!
Key Tracks:
Radiosurgery: The title track and appropriately chosen first single from the album. It seems that Chad is wanting to let a girl from his past go and it’s loads harder than he could’ve imagined. As most of you already know, it can be hard to get over the past when something good comes into your life. This song is about that struggle. Most of you already know, but Chad Gilbert of New Found Glory has been in a relationship with Hayley Williams of Paramore for the past 3 and a half years and it’s been a hell of a ride for them both.
Summer Fling, Don’t Mean a Thing: This song is about the longing for something more than a one-night stand. Everyone wants a real relationship, am I right? Something meaningful that will stand the test of time and will remain true through good as well as bad? This song is about that feeling. Not wanting to be used for the Summer and thrown away after she’s done with him. This is probably one of my favorite tracks on the album.
Final Thoughts:
If you’re looking for an amazing pop-punk record, look no further. This has everything that pop-punk fans look for: Meaningful and fun lyrics, catchy beats, and great, fun themes. Don’t download this album for free, go buy it. Show that you still support your favorite artists. This will quickly become a classic. I honestly have to say that anyone who decides to buy this album will definitely be proud of themselves for doing so. Pick up your copy of Radiosurgery out on Epitaph Records on October 4th!