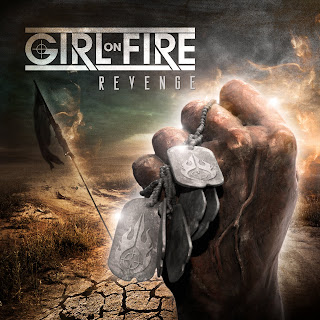 2. Tragic Ending
3. Medicate
4. Secret Lies
5. Close Your Eyes
Up-and-Coming rock band Girl on Fire from Seattle, WA have just recently released their debut EP, Revenge on Hollywood Waste. The vocals on the EP are reminiscent of Chester Bennington of Linkin Park and wiL Francis of Aiden. The guitars are fast, heavy and angry and the drum beats are explosive and crashing. It shows what can happen when a band gets signed by a label who can really shoot them in the right direction.
Key Tracks:
Revenge: Beginning with a soft piano intro and evolving into possibly one of the heaviest tracks on the EP, Revenge is about just that. Getting your revenge for something that has happened to you. This is my favorite track on the EP and, being the first one, it immediately caught my attention. It’s pretty cool that the vocals sound alot like Chester of Linkin Park in this one, but it shows a lack of creativity which we don’t see in many bands these days, unfortunately.
Final Thoughts:
A bit on the generic side as far as lyrical content and melody goes but overall it’s a fun listen. I only gave this EP 3 stars because it doesn’t really stand out to me. There’s so many bands out there who strive to be like other bands and not enough who strive to be themselves. The vocals seem like he was trying hard to be Chester or wiL and that turned me off of being able to enjoy the album as much as I probably could have. But would I recommend it? Yes, and here’s why: The band is very talented and you can also tell that they have fun doing what they do and I believe that if they are themselves, they can truly get somewhere. I’m not knocking them at all, I’m just doing my job and being a critic. Check out Revenge by Girl On Fire out now on Hollywood Waste!