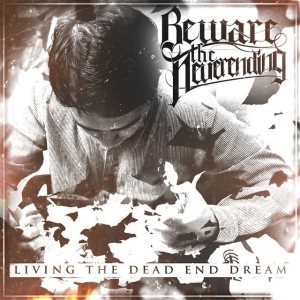 What do you do when you truly hit your bottom? Do you keep scraping, digging yourself deeper just to see if you can really, truly, sink any lower? Do you lean on your friends, using their support as a lackluster ladder to try and ascend out of the pit you’ve made for yourself?

Or maybe you don’t; maybe you pull yourself up on your own, accept the hard times and conquer them, using them to climb out of your own grave and carve fresh paths through what was once a dead end. If that’s your tactic, then make no mistake: Beware the Neverending are going to be your soundtrack. Living the Dead End Dream is a powerful combination of post-hardcore, metalcore and thrashy, groovy straight-to-the-face metal with a poignant, powerful message. Instrumentally driving, vocally bold and lyrically brilliant, Beware the Neverending are proof that, ultimately, not all good things have to end.

Instrumentally, Beware the Neverending find themselves at a crossroads. One path is paved with punishing, aggressive and metallic heaviness—defined by raunchy riffs and bone-splintering breakdowns. The other road is a softer, more easily traveled one, crafted by crooning, catchy post-hardcore rife with melody and uplifting harmonization. So what happens with a thrashy, violent storm brews over this intersection of instrumental stylings? Living the Dead End Dream. Percussionist Giovanni Casanova provides a cunning, crushing performance throughout the EP that roams from ruthless, hammering breakdowns to punchy, catchy and up-beat choruses. “Rat Race” sees Casanova’s quickest work, while tracks like the anthemic “Living the Dead End Dream” are a beautiful blend of brutality and his more bouncy side, dotting speedy, pummeling sections of footwork with fancy, flourishing fills that catch the listener’s ear. Giovanni’s greatest asset is his ability to allow Beware the Neverending to incorporate a variety of stylings into a single release—or song, as it may be—with both energy and talent; however, Giovanni is not alone in this endeavor. Bassist Clark Gargan takes Giovanni’s speedy, sublime percussion and adds girth to every aspect of it. Each breakdown hits ten times harder with Gargan’s bass to hammer home a hefty low end. “Heart of Gold” is an excellent example of this—as is the endlessly entertaining intro track, “Rat Race.” Gargan’s grooves go above and beyond the call demolishing, down-tuned duty though—as songs like “A Song About Faith” highlight Gargan working in tandem with guitarist Joshua Claxton to create an immersive, syncopated and surreal experience. Claxton’s fretwork feels like a chunky blend of Gideon and Impending Doom. With catchy, uplifting and chug-friendly grooves like the one that kicks off the album’s title track, or shreddier moments like the riffs writhing throughout “Rat Race” and “Azalea City” giving Living the Dead End Dream a more technical element that will have metalheads world-wide windmill-banging furiously enough to stir up tornadoes.

However ambitious it may be, Beware the Neverending’s carefully constructed musical scaffold would topple without a vocalist talented and dynamic enough to “roll with the punches” and go with the band’s flow. As it turns out, even during the choppiest moments of Living the Dead End Dream, vocalist Bobby Stratton remains collected and in command, reigning over jagged breakdowns like those in “Living the Dead End Dream” and “Rat Race” with expert flow and superior stamina, yet adding strained clean choruses throughout the release that are bound to catch the listener off their feet. Stratton’s powerful, punchy mid-range scream is strong and unwavering, changing candor or pitch only to dive into a gritty bellow or a rough, rugged cleanly sung refrain—like that on “Heart of Gold.” Rather than employing a standard crystal clear clean voice, Stratton opts for a thrashier, harsh voice that works excellently with the band’s rough-and-ruthless instrumental approach.

Even at their softest and most melodic, Beware the Neverending’s maintain a metallic, rough edge that adds intensity to even the most serene moments on Living the Dead End Dream. Because of this, Beware the Neverendingare a forceful, furious listen that will keep the listener’s pulse racing even during moments of intended rest. “A Song About Faith” sees the band at their most bitter and aggressive, with Casanova pulling out every stop there is to pull. Furthermore, “Azalea City” is a lyrical masterpiece with a chorus that contrasts rough singing with rougher yet screaming, attacking the listener with a catchy, abrasive Molotov cocktail of a refrain. Furthermore, Gargan and Claxton team up at the climax to the album’s title track, oscillating between bouncy grooves and bone-busting heaviness as if they were wrecking balls coated in rubber. All the while, Stratton is simply brilliant, delivering a comprehensive performance that is the icing on Beware the Neverending’s bountiful and brutal cake.

While Beware the Neverending’s latest EP does indeed come to an end, the mark it makes on the listener doesn’t necessarily have to. Crushing enough to leave bruises and catchy enough to stay caught in the listener’s head, Living the Dead End Dream is a powerful and unique EP that is bound to get the listener out of any rut—musical or otherwise.

For Fans Of: For the Fallen Dreams, Like Moths to Flames, A Plea For Purging, Gideon