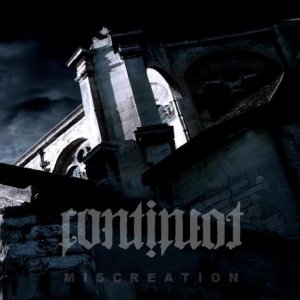 Have you ever played that word game with your friends where you have to describe an object without using it’s root word? Like describing firetruck without using “fire,” “flame,” or “truck.” Sometimes, its an easy feat. The object can be either so mundane or unusual that it can be described easily no matter what words you have to avoid. Other things, however, aren’t always so easy. This case is much akin to attempting to describe Continent, and their debut full length Miscreation without naming any of their various influences. Rather than create a ground-breaking, leper-like crossbreed of mismatched genres, these Canadian chuggaholics perfect their volatile breed of beatdown-laced deathcore, creating an engaging experience in the process.

Miscreation is a tedious jigsaw puzzle of influences and individuality. Its easy to pick and choose certain clear-cut sounds from the mess though–piano sections ala Make Them Suffer, mosh-friendly beatdown ala King Conquer and slamming, soul-slaying breakdowns ala I Killed Everyone. “So,” you might be asking. “Why don’t I just go listen to any of those bands to get my fix and ignore these fellas altogether?” A good question–but this is where Continent’s individuality comes into play. Rather than just toggle on-and-off the various influences from their peers, they layer and blend them expertly to create a tapestry of sound which, as a whole, is unlike the other bands they may find themselves grouped with.

First and foremost, however, Continent hit hard. Starting with the first second of “Devastation” and going all the way through the last seconds of “Worthless,” Miscreation is a crushingly heavy album that hits like a freight train, grinding your body to the tracks for the entire half-hour run time. Whether it’s the towntuned, mud-covered guitar tone chugging over the deep, bass-heavy drums or the lightning quick tempo changes into blazing blast beats and sweep-filled riffing, Miscreation doesn’t stop. Surely, there are times where it slows down to a stagnant near-stop, only to speed back up at the drop of a dime to pull the listener away from the lull of possible monotony. When Continent aren’t creating Pangea-splitting breakdowns, they incorporate clever riff writing and strong song structure to keep even the purest of chug-addicts occupied from breakdown to breakdown–a tool used in a nearly crutch-like manner.

I’ll be the last person to disown a band for not playing enough breakdowns or being too heavy, but there are times on Miscreation where it feels like Continent might just be going through the motions to reach the next heavy part. Is this a bad thing? Not entirely–as the breakdowns are always, and I mean always worth it. Ultimately, though, there are only so many sweeps that can keep me interested before I begin to get impatient and demanding the next devastating disaster that exists as a microcosm in each of Continent’s chug-tacular heavy parts.

Miscreation cannot simply be described like a deathcore recipe. It certainly isn’t one-third of a cup I Killed Everyone, one-quarter of a cup Depths of Hatred, garnish with Make Them Suffer and bake on 350 for a half hour. Rather, Continent have crafted an album which is truly greater than the sum of its parts, and functions as a well-oiled, punishing juggernaut, bringing heaviness and dynamic brutality to deathcore enthusiasts everywhere.