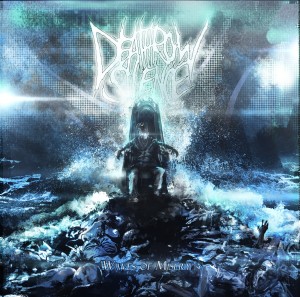 Imagine for a second the complete nihilism of the thoughts plaguing a death row inmate. Dismal, deep and depressing thoughts that are likely matched only by the murky, depraved acts which landed them on death’s doorstep in the first place. While it can be hard to put such dense and weighty thoughts like those into words, it can be even more difficult to encapsulate them into sound–a feat which Italian deathcore titans Deathrow Silence accomplish quite handily. Comprised of three crushingly heavy guitars, a rollicking and grimy bass, punctual drumming and visceral vocals, Waves of Misery is an EP which creates an immersive, dark and negative soundscape for the listener to trap themselves in.

Three simultaneously crushing guitars are easily the strongest aspect of Waves of Misery. Deathrow Silence create an infinitely abysmal heaviness with their guitar tone that subjects the listener to Mariana’s Trench-like pressures. While this might conceptually seem claustrophobic or smothering, it’s actually quite the opposite. The guitars create a constant “baseline” of heavy which keeps the album from slipping too far into the accidentally-melodic or the over-bearingly insidious. Additionally, the existence of the third guitar allows for sparse amounts of melody and technical harmonization to show up without slowing down the song or disrupting from a slamming groove. “Gehenna’s Ditch” is a stunning example of such instrumental proficiency: the third guitar catalyzes the easy transitions into and out of the song’s climactic breakdown, nosediving into a startlingly brutal breakdown just long enough to entrance the listener before speeding back up to a technically impressive, riff-led pace.

Ever so slightly beneath the oppressively heavy guitars lies the rumbling, groovy bass. While Deathrow Silence make no effort in hiding their riff-heavy dynamic, their bass guitar features a loaded, rumbling tone which amplifies the three-way crush created by the guitars. While the pulverizing mechanics of the guitars is impressive, the dialectic bone-breaking barrage of blast beats and grimy groove created by the drums and bass rivals it closely. The low-end of the bass guitar combines with the booming bass drum to create one of the smoothest, yet heaviest tones imaginable. “(Nec)Romance,” while abhorrently titled, features a china cymbal as lacerating as a bed of broken glass and a bass guitar which donkey punches the listener into submission. Just barely heard rumbling beneath the guitars, the bass is just one surprise hidden in Waves of Misery which rewards the attentive listener or passionate deathcore fanatic.

The last element of Deathrow Silence’s multi-part amalgam of heavy are the variety of vocal styles implemented throughout Waves of Misery. Utilizing blistering high screeches, demonically gravely low growls and an arsenal of inwards and squeals that would make Despised Icon proud, the vocal diversity on this album is incredible. While the guitars, bass and drums create a punctual siege on the listener’s ears, the vocals rip and tear with tooth and claw into their eardrums. The vocals are diverse to the point where there isn’t one track which showcases them better than another. Each track is packed to the brim with extreme vocal variation which keeps the instruments from becoming grating or the band’s dynamic from getting stale. While their non-stop onslaught is invigorating, without the vocals, Deathrow Silence would be hard pressed to keep it interesting for even a brief EP like Waves of Misery.

Deathrow Silence take the staples of several tried-and-true deathcore tactics and perfect them with the addition of a crushing third guitar. On top of that, punctual, lacerating drumming and intense, diverse vocals create a deathcore dynamic that–while often used–is rarely used well. Waves of Misery is an archetypal downtuned chuggernaut of an album that will drown the listener in tidal wave after tidal wave of delightfully crushing heaviness.

For Fans Of: Bound by Exile, Impale the Betrayer, Far West Battlefront, Headwound the Pony