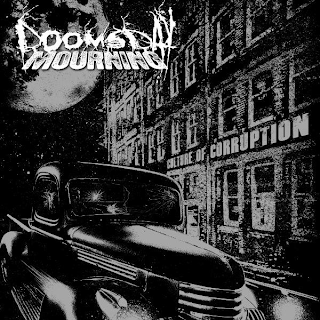 1. Zero Minutes (feat. Kevin from Line of Scrimmage)
2. Player Haters Ball (feat. Rick from This or the Apocalypse)
3. Culture of Corruption (feat. TJ from Knuckle Up!)
4. Legends Are Made Not Broken
5. Oneone3sevenoh (feat. Eric from The Confrontation)

Fans of their old EP ”The Science of Exploitation” can stop reading here and buy this album right now!
For the people that never heard of Doomsday Mourning, they are a five man band coming from New York with a simple yet unique sound, with just one thought in mind: making angry fucking music!
And they succeeded with that for the second time with this new EP, much like the first release the whole album has a constant heavy flow with a grimey meshuggah/beatdown influenced sound combined with some of the most hatefull lyrics ever heard.
And when i say hatefull i do mean hatefull.
The reason for this is the lyrical content, its not about aliens, universes, spaceships, dimensions or all that crap you might be used to, its not about the wrath of god or an impending apocalypse either, the lyrics are about real life situations that everyone can relate to, and thats exacly the reason why i feel the need to strangle someone to death everytime i hear this music.

The EP starts strong with the track ”zero minutes” which uses the word ”fuck” more than the pope molests little children, which is a good thing because by now you know your in for a wild ride (and you might end up with some bruises).
This agression is kept throughout the whole EP.

Another interesting concept they brought back in this second release are the many guest vocalists, which is something i personally didnt think they could manage to bring back, but im glad they did! we’re talking almost every track here! its not something you see alot with other bands in this genre, atleast not this many on one album (it reminds me more of rap albums).
I can only hope they will keep doing it for future releases because it makes for an interesting music style.

In short: Doomsday Mourning is a band who knows what their fans want: no-bullshit music, no over complicated technical metal, no expensive overproduced albums, just grimey in your face angry music that will get you fucking pumped.
Dont dismiss this as another mediocre album, give it an honest chance and go listen to this shit!

Also make sure to keep an eye out for their full length album ”Predisposed” coming later this year.