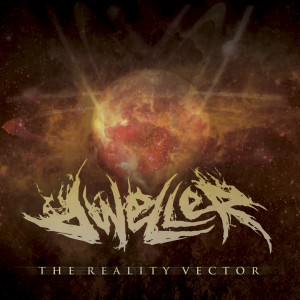 Sitting down in your studio apartment after a long, grueling day at your equally grueling dead-end, nine-to-five day job, it’s just about six thirty, the TV is on, and it looks like the good part of your day can finally begin. Just as you kick back with your beverage of choice, screams and shouts echo from the street outside, and your nightly news program erupts into static–shortly before turning to the emergency broadcast signal. Warnings in every language imaginable begin scrolling along the bottom of the screen: this is it. The world is ending. This world’s sudden plunge into deconstruction surrounds you like a blanket of razor-wire–much the same effect as Michigan deathcore act Dweller–and their debut full length The Reality Vector–have on the listener. Laden with lacerating riffs, pummeling drums and soul-squandering breakdowns, The Reality Vector is a polished, devastating bastion of time-tested deathcore brilliance modified with inventive, melodic renovations.

First: silence. Then, footsteps pound against the tar outside your door like dozens of galloping horses. Not long after, there are explosions, followed by the roar of jet engines and the crash of shattering glass. Dweller’s The Reality Vector is not so different. Beginning with a placating silence so tense it’s almost tangible, “Visions” soon delves into a bass-heavy, spine-snapping groove which rots and desiccates into a smothering breakdown. Throughout the album, this mix is used perpetually. Led by deep, pummeling drumming and dark bass, the guitars follow along and add flair in the form of grooves which range from silky and smooth to grimy and crunchy. Even further, while one guitar line rumbles in the dirt alongside the drums and bass, the other soars skyward with shredding, solos and jarring harmonics that catch the listener completely off-guard. Together, the instrumentation throughout The Reality Vector–especially as it is seen on “Overcoming Depravity” and “An Eternity Defined”–creates a catastrophically engaging backdrop.

It isn’t the rumbling, crashing or smashing of the chaotic backdrop that causes sweat to bead upon your forehead, or cause your hand to shake. It’s the screaming. Piercing right through the brick walls and deep into your ears, it’s the screams of the innocent people, mowed down aimlessly in riots (or by riot control) in an attempt to keep peace. Similarly, Dweller’s vocal prowess is what draws the ear as much–if not more so–than it’s spastic, deep background. Maintaing a near-constant guttural bellow, at first listen, Dweller’s vocal aspect might come across as monotonous or downright boring. However, further listens reveal the true nature of the growled prowess in The Reality Vector. They create an anchor to keep the other aspects of the album centralized. Furthermore, they add to the crushing, downtuned grooves without distracting or infringing upon the high-fretted snippets of shred which can be found throughout the album. And while the heavy, battering growl makes for a solid standby, when the vocals do deviate from the norm, they truly stand out and draw extra attention to the track or section the change occurs in. Moments like this create culminations of vocal expertise and instrumental prowess which can be verily identified as the source of Dweller’s appeal.

Then, it happens. First it seemed like it might have just been a passing blunder, or a poorly-aimed stone thrown against your door, but then, it happens again. And again. The hinges start to bend inward, but before they manage to break, you’ve shoved open the window, and commenced climbing the rusty fire escape ladder, desperate to escape the chaos below. The tension that starts within the first seconds of “Visions” builds throughout The Reality Vector until finally, at the climactic onset of “An Eternity Defined,” the tension breaks and all of the pressure is exuded onto the listener in a massive wave of crushing brutality. For nearly four minutes, “An Eternity Defined” unleashes half an hour’s worth of appetite-whetting insanity into the listener’s cranium. The dynamic established between the quick-picked tremolo leads and the bouncy, sliding grooves which devolve into incinerating breakdowns keeps the listener entertained, but not over-stimulated–a balance many technically-infused, melodically-driven deathcore bands aim to achieve without actually fulfilling.

Whether or not it really is the end of the world or not, Dweller’s debut full length album The Reality Vector is still packed with hair-raising chaos. Sky-high melodically-tinted leads with absolutely obliterating heaviness packed densely behind them, every track has something for any fan of any heavy music. Take your time, and listen up, because while it isn’t the end of the world (yet), The Reality Vector is certainly the end of boring deathcore.

For Fans of: Oceano, The Acacia Strain, Despised Icon