Home » All Posts » Reviews » REVIEW: Fit For A King- Descendants 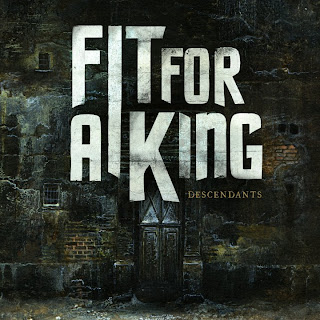 Up and coming Metal-core band Fit For A King has great things in store for this winter. We just got our hands on their debut full length album, Descendants, and we have to say we are very, very impressed with the musicianship that has been displayed. The 5-piece from Tyler, Texas, recorded at Chango studios in Central Florida. Featuring bands such as Woe, Is Me, Memphis May Fire, Dream On Dreamer and Hand To Hand, Chango studios were a great fit for their musical style. Get excited! This album is everything as advertised and brings a different burning passion to this dead heavy music scene!

Overview
Descendants , is a great piece of work all the way through. The production is very solid, the vocals are raw but still very clean, and the guitar and bass work are really diversified. Most notable about the band is that their lyrics are Faith based, meaning that their Christian beliefs are molded into the music and into the album as a whole. Most of the cliche’, ” We’re a christian band” lines are so overused and at times most bands in the Christian scene seem very hypocritical. But FFAK brings their passion and love for God and their heavy roots into what most call modern metalcore. The tempo of the album changes from song to song, some songs being more melodic and slower, others being hard hitting, and fast paced. Descendants is a great listen and out of all 12 tracks, I couldn’t really find anything I disliked or hated. It’s your typical metalcore/hardcore album with some great clean vocals and obviously those great screams.
Key Track: Messenger Messenger
When the band released this demo back in late 2010, I was in love from the first listen. So many elements of mychildren mybride in the vocals and the heaviness of the song was so amazing to drive to. The meaning of the song speaks volumes to me because of the lyrics and the drive begind it. The opening line is amazing and just opens the song with a great breakdown. The newer, re-recorded version is faster and cleaner with the guitar riffs and obviously the drums are more powerful than ever. This song is so short and in my opinion, is the best song on the album. From the breakdowns, to the amazing bridge, and then the ending line of ” messenger messenger! “, this song is for all those metal heads wanting their quick, but powerful head banging fix!
Key Track: Descendants
In my experience, title tracks off a record are usually one of two things. 1, the are the most boring and least diversified on the album, or 2, they speak volumes for the musicianship and the passion the band has by making one of the best songs on the album. This song is most definitely number 2! Clocking in at 2:21, this song is easily the heaviest on the album. Fast paced, hard hitting and those crushing low screams, yelling out the line ” We are descendants of the almighty!” the song is going to be one of the favorites for fans who have followed FFAK. I highly recommend you put this song on repeat as you will continuously break things all day from the heaviness of this song! Descendants is meant to be an opener, and a filler, and it most certainly will get the pit rocking!
Final Thoughts
This has been an absolutely fun album to review and I’m so stoked for everyone to hear it. In today’s music scene, ” generic ” is thrown out alot about bands, and to some, this album may seem just that way. But what DOES separate the band from others is they have the experience and the live show to back up their product. I am proud to say I’ve seen the band live numerous times! I want to say thank you to Cory Hadje for allowing The Transcendence to review this amazigng record, and for the bands amazing efforts, I give this album an outstanding 5 out of 5 stars! Great job guys! Don’t forget to catch FFAK on tour this fall on their Headlining Descendants Tour with My Ticket Home and From Atlantis! And pick up Descandants everywhere when it drops on September 27th!!!