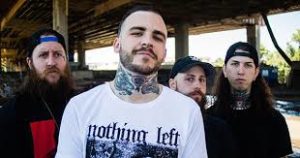 From the second we first become truly aware of the world around us, we as a species are also immediately aware of the world’s various injustices, socially and otherwise. When we’re children it’s hard to accurately grasp the depths of hatred and bigotry we’ll come across in our time on this rock. But what we all also know is that hatred is not something we are born with, but something we are molded into- and, as Boston heavy masters Great American Ghost aptly title their newest output, hatred stems from the seed.

Whether it be religious intolerance, racism, sexism, or just about any -ism you can think off, these behaviors are all passed to us from our parents and our immediate families. As we grow, we’re given the choice to let these things consume us, or we choose to take a bitter, angry stance against the cruelties of our fellow men. Great American Ghost has clearly chosen the latter option, with songs like album opener “No Savior” and tracks such as “Deliver Me” and “Time Is Your Enemy”. Blending together a whirlwind of vocal venom and instrumental insanity, Great American Ghost deliver the gods with eleven electrified hardcore/metalcore slabs of righteous anger. From the opening seconds of songs like “Destroyer” through the chilling climax of penultimate track “Lifeless”, the guitars lurch headfirst into a frenzy of frantic fretting, supplying the record with enough vitriol to make the most hardened rioters afraid for their safety. Pair this with an absolutey oppressive bass tone and drums pulled from the thunders of Heaven itself, and you have an instrumental section that puts even the greats to shame.

To speak of a band’s instrumentation is nothing worthwhile without also mentioning their vocal element, and Great American Ghost does not disappoint in the slightest.  From the introductory shouts that kick off “New England Misery” to the varied ranges on “Deliver Us” and “Lifeless”, Great American Ghost solidifies their standing in the New England hardcore fold. Every second of this record is filled to the brim with unmitigated aggression and purpose, adding wieght and grit to each and every last thud of the kick drum or smack of the snare. There is, simply put, not a single dull moment on this entire record.

While Great American Ghost had a nearly flawless debut, their efforts this time around result in a much more cohesive and solid output. Fans of the band’s early material will love every second, and new fans will surely be drawn to this record like flies to sugar.