Home » All Posts » Reviews » REVIEW: Like Moths to Flames – When We Don’t Exist 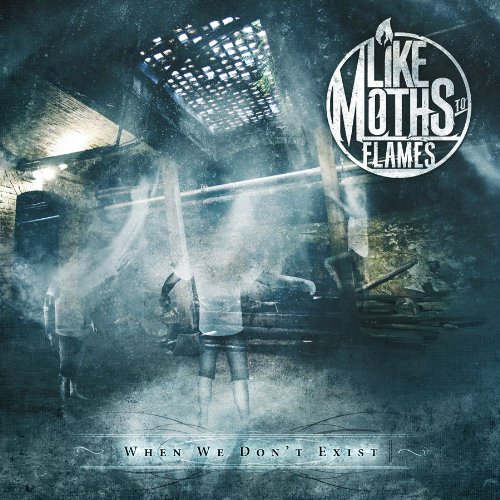 Album: When We Don’t Exist
Buy: Amazon
iTunes
Rating: 4/5
Tracklisting:
1. The Worst In Me
2. GNF
3. No Hope
4. You Won’t Be Missed
5. Faithless Living
6. Your Existence
7. Trophy Child
8. My Own Grave
9. Something To Live For
10. Real Talk
11. Praise Feeder
Like Moths to Flames, from Columbus, OH is one of those metal bands that was out there making a name for themselves long before they were discovered. When I first heard them back in 09 on a couple demos…I was blown away! But the progression from their debut EP Sweet Talker to the release of their debut full-length, When We Don’t Exist is just incredible. The EP took me to a whole different level on current metalcore but hearing the album blew all pre-conceived notions of this band completely out of the water. Like Moths to Flames has found, in my opinion of course, a suitable home on Rise Records. I’m proud to bring you my review of this truly phenomenal album, so sit back and enjoy!
Key Tracks:
You Won’t Be Missed: The first single released on the album, starting with a simple riff and exploding into Chris’s memorable vocals. This song’s meaning is pretty clear by the title but it’s about a relationship that went sour and the narrator is just moving on by telling the girl not to come crawling back to him when things get tough. I’m sure we’ve all had that “I don’t give a fuck” attitude after a break-up…especially a bad one, quite obviously the reason here was cheating. This song is a big “FUCK YOU” to the people in your life who have made you feel this way.
Trophy Child: This song seems to me to be about people who don’t take good advice. The narrator seems to be telling the person, who is in a bad way due to not taking his advice, that he doesn’t feel sorry for the person. Have you ever had that feeling you had really good advice for someone and you KNEW they wouldn’t listen but you told them anyway? Think about how many times this has happened to you and how many times you saw things play out EXACTLY the way you figured they would when they didn’t. This song is about YOUR perspective of that situation. Bottom line is an old saying: “You can lead a horse to water, but you can’t make it drink” You can try to help a person but in the end, the only person who can help them is themself.
Final Thoughts:
The bottom line about this album is: If you thought you liked the band or even KNEW you liked the band when you first heard them, you will LOVE them now. The high-energy, aggressive in your face band they were in the beginning is completely revamped and recharged on this album. It explodes with fury and yet is melodic enough to tempt a good bit of previously unlikely listeners. Definitely give this album a listen! Check out When We Don’t Exist out now on Rise Records and prepare your ears for one hell of a treat!