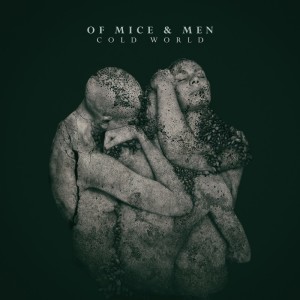 Bombs have fallen, war has plagued the world and corruption has become the pinnacle of society. You walk outside and have to cover your face with a mask to avoid breathing in the fumes from the acrid smoke that surrounds you. Buildings of a once beautiful city now lie broken and decayed. Children cry, orphaned and alone because the war has taken their parents from them, either as casualties or as soldiers. All that lies in wake is the ruins of a once beautiful world. A world that is fueled by the hatred of men, caring only about themselves. It’s a Cold World that remains, and it’s the saddest sight you’ve ever seen. You might think that I’m starting this review with a reference to labelmates Crown the Empire and their Fallout saga but I’m merely painting a picture. In this picture, we see a man who stands alone. This man has been through hell and back, reached out to all who might hear him, but remains ignored. As he’s ignored, things begin to get worse and he sinks to the lowest he’s ever been. This is the type of story that uses music as it’s fueling source, to tell a story and let you know that you’re not alone. It is with that in mind that Of Mice & Men created the music contained in their 4th studio album Cold World, produced by David Bendeth.

For the lyric-writing process of this album, frontman Austin Carlile decided to wear his heart on his sleeve. More raw, real and open than he’s ever been. As many know, he has dealt with some very serious health issues for years. These have tried their hardest to cripple him, forcing the band to have to cancel shows and, at times, have done far worse… leaving him on the verge of death. Rather than pulling the band apart during these times, though, it has created a closeness that is unmatched. This has allowed Carlile and bassist/clean vocalist Aaron Pauley to write some of the most meaningful lyrics we’ll ever hear from them. You can truly hear the pain that Carlile has endured through his lyrics. It’s also really great to hear that he and Pauley have an equal amount of vocal time, where previous albums would focus too much on one or the other. It wasn’t until Restoring Force that they really started to find an equilibrium.

Musically, there is a cohesiveness to this band that has never quite been felt to the magnitude it is here. As a whole, and as individuals, this album shines as a diamond in their discography. Where nu-metal/alternative metal is making a comeback, OM&M decided to dip their toes deep into this territory and the result is staggering. Songs clearly influenced by bands like A Perfect Circle (“Game of War,” “Contagious”), Slipknot (“Pain”) and KoRn (“The Hunger”), it is clear that they have finally found a sound that they can embrace as their own. While this dives further into the mainstream than older fans of the band may hope, it’s a welcome change for sure. While previous records focused a lot on the band’s vocalists, this album takes the time to appreciate each individual member of the band. Nothing is muddied down or too loud in the mix, rather it’s all perfectly balanced, which proves that Bendeth really knew what he was doing. While the bands that Bendeth work with do have a recognizable sound, they stand tall with their creativity, proving that they made the right choice in him.

Simply put, while far different from what you’re used to from them, this is Of Mice & Men’s best work to date. They made a bold leap into uncharted territory with Restoring Force, embraced the faults that they saw in it and used it to dive further down the rabbit hole and create an album that would make them, as well as their fans, proud to be a part of. Atmospheric, beautiful, emotional and angsty… Cold World gives us everything that Restoring Force may (or depending on your viewpoint, may not) have lacked and dials in the great parts about that album. At the same time, the nu-metal influences really worked for them. If you do anything this year, be sure to pick up your copy of Cold World and see Of Mice & Men in a whole new light. The album is out this coming Friday, September 9th, on Rise Records and can be pre-ordered below. Check out the videos for “Pain” and “Real,” as well!