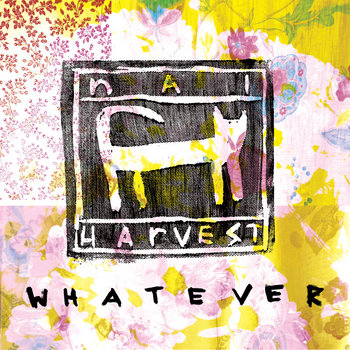 Brtish emo project, Nai Harvest, first found me when I picked up their Ceiling Summer EP two years ago. The first track, “Crossing Days Off My Calendar,” became a kind of anthem for me that summer. I listened to it everyday, sitting in my room shouting: “one more year ‘til I leave this place again, one more year ‘til I leave these friends again,” trying to come to grips with the friends I was losing to college, growing up, high school bullshit, etc. For the next two years, for whatever reason, Nai Harvest and I parted ways only to meet again this summer when I stumbled on their debut full-length, Whatever. Like the Ceiling Summer EP, Whatever came to me at the right time and has become the soundtrack to my summer. Nai Harvest have clearly grown in the last two years but also haven’t lost the parts of their music that are most relatable, enjoyable and emotional.

Instrumentally, Whatever is a triumph. As the emo two-piece has become a staple of the genre, it becomes more and more difficult for bands to bring something new to the scene. Bands like Oswalds, Dads, and Olde Pine already conquer the twinkling duo emotional sound. Nai Harvest, however, apparently unphased by their recently crowded niche-genre, carve out their own space with vigor. Whatever retains their rollercoaster riffage and ambitious time-change-juggling drumming but adds a dimension of shifting tempo which separates them from the classic American twinkle. Tracks like “Distance, etc.” and “To Be There” flaunt a grungy sound which mixes a much needed dissonance into the bouncing fret work and fluttering high-hat trills of past releases. Ben and Lew’s chemistry shines in the down-tempo sections of Whatever, where, at times, I found myself wondering if I was listening to an Adventures album. While other two piece bands stick to punchy math-inspired instrumentation, Nai Harvest deviate from the norm with their crushing slow segments.

For all the new elements, though, Nai Harvest manage to preserve the fun and passion of the Ceiling Summer EP and 2012’s Feeling Better 7 inch. The opening riff of the album’s title track perfects the sound that previous releases reached for. The guitar tone rings exactly how it should, not the hyper clean, maximum treble pop of “Crossing Days Off My Calendar,” but instead a half-distorted, mid range sound which constructs a more mature atmosphere for Whatever. The drumming has been similarly slightly tweaked to better blend with the feel of their sound. This evidence of growth preserves the fun of Nai Harvest. They even went so far toward perfecting the enjoyability of their old sound on Whatever as to rerecord a track off of the Ceiling Summer EP. The new version of “Red Letter Day, On Play” showcases the bands loyalty to their old sound while vastly improving the song structure and execution. Overall, despite the changes evident on Whatever, it is still the kind of album you sing along to on a shady summer bike ride, on an afternoon drive with a group of friends or to yourself while whipping up pancakes in the morning. It’s just so damn fun.

It’s that instrumental mix of new grungy elements and old whimsical mathiness that sets the stage for the lyrical prowess of Whatever. The album struggles with worries of being boring and a pervasive sense of indifference culminating into one giant “whatever.” In a way, the album’s emotive “whatever” pens a more powerful message than the unmitigated sadness of other emo lyricists. Nai Harvest’s lyrics focus on the unbearable banality of the everyday. An inability to feel and a deadness inside play into this “whatever” that makes the album a strange combination of both upbeat and melancholic. I’m impressed with Nai Harvest’s maturity in recognizing there’s more emotional power in the day to day problems of people who are lost and indecisive than in tragic heartbreak and loss.

Whether it’s Nai Harvest’s impressive technicality, bouncy instrumentation or relatable lyrics, the band has something to offer for every fan of the genre. After two years away from Nai Harvest, Whatever is like a relaxing afternoon with an old friend who, though changed, has gotten nothing but better.