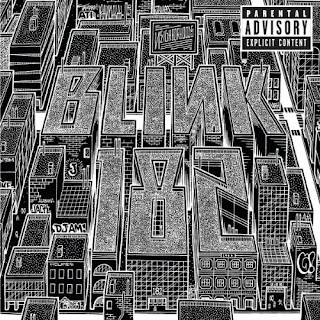 Artist: Blink-182
Album: Neighborhoods
Rating: 4-Stars
Facebook
Everyone who hears the name “Blink-182” is instantly sent into a state of nostalgia, correct? Well, 7 years after the release of their self-titled album, the trio is back and some may argue, better than ever! The highly anticipated follow-up “Neighborhoods” shows that these guys have evolved far beyond the childishness they originally displayed which we had all come to love. If you have followed the members individually, (Boxcar Racer, +44, Angels vs. Airwaves, and Travis’s solo project) you’d know that they have evolved beyond the punk sound they once embraced. You may argue that this is just another “radio-rock” album and that they are doing it just to get the fans off their backs. That couldn’t be further from the truth: Tom, Mark, and Travis have recorded this album for the fans and to show that they still do things for the love and the fun of making music. After setbacks, complications, and many other problems regarding this album, they’ve finally made it ready for the public. You must go into this album realizing that with aging, comes maturity. There will be both positive and negative publicity for this album, but overall, no one will argue that this album is progression in it’s finest form.
Key Tracks:
“After Midnight”: Starting out with a slow, chilled-out drum beat from the legendary Travis Barker, this track is, like it’s predecessor “Up All Night”, a song that is reminiscent of Tom Delonge’s project Angels vs. Airwaves. A slow, soft song with a catchy chorus, and Mark’s first chorus appearance.
“Kaleidoscope”: Mark’s first full-song appearance, and the first song on which you begin to feel the reminiscence of old Blink-182. I believe this would have made more sense as a 2nd single for the album, but “After Midnight” is a great way to show their progression between singles. The alternating choruses between Tom and Mark make this a great pop song, and a very catchy one at that.
The bottom line is: While it lacks in the comedic, childish nature we’re all so used to, it makes up for it in progression, experiment, and overall catchiness. I recommend this album to anyone who has been a fan of the band’s side projects or that enjoyed the self-titled album. If you come into this album and expect it to be anything like “Take Off Your Pants and Jacket”, “Enema of the State”, or “Dude Ranch”, you will be highly disappointed. You’ve grown up since then, haven’t you? So have they. I give this album a 4-Star rating and stand behind it all the way.