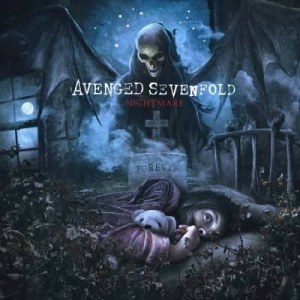 Avenged Sevenfold have come along way since their first album “Sounding The Seventh Trumpet” and their first concerts. This is a band who have been through hell and back to get to where they are now. From label rejections to disappointed fans and their most recent tragedy, the loss of their dear brother/drummer Jimmy “The Rev” Sullivan. And as much as these 5 men have wanted to give it all up and go back to their normal lives, they’ve never let anything stop them. With 5 records now under their belts, they know all about what it takes to make it and how hard that journey is. Their latest effort, “Nightmare”, has taken them above and beyond to bring their fans the best album they have released to date. From face-melting solos, to heart-wrenching ballads, to haunting choruses, and even a duet with the now-deceased Jimmy Sullivan, this album is a great acquisition for both new and old fans alike.

Track: Nightmare
The opening track, “Nightmare”, sets the tone for the rest of the album. .This masterpiece portrays a bumpy, roller-coaster ride through Hell and back. Don’t let the bells fool you, kiddies, this isn’t a trick to put you to sleep. As Shadows proclaims “Now your nightmare comes to life…”, you’re immediately awoken from your lucid state and pulled into a terrifying nightmare. With haunting cackles from vocalist M. Shadows, face-melting solos from Vengeance and Gates, and thundering drum beats from the ring leader himself, The Rev. This man has a legacy, although his time had to come to a short close, the music he built to inspire and create lives on, and derives from his workings of Nightmare. This track makes you feel every bit as though you’ve been pulled into a fuckin’ nightmare.

Track: God Hates Us
The 7th track on the album, “God Hates Us”, is a play on the anger we all feel after a loss. We’ve all screamed, cried, and pounded the ground in search of the answer to a simple, yet complicated question. “Why?” Why, if there WERE a god would he allow such horrible events to occur. This track is simply that anger put into song form. From the guitars, vocals, and drumbeats in this song, you can truly feel how angry the band is with god.

Track: Fiction
This was the final track to be written before the recording process began. 3 days before his untimely death, James “The Rev” Sullivan handed this masterpiece into Shadows and the gang and said “that’s it…that’s the last song for this record.” Little did the band know that this would be his last song ever written. The title, “Ficiton”, comes from one of “The Rev’s” nicknames in High School. With a haunting melody, bone-chilling duet with “The Rev”, and an overall melancholy feel about this track in general. This is EASILY the saddest song that the guys have ever written. But it’s a great way to remember the legacy that James Owen Sullivan left behind.