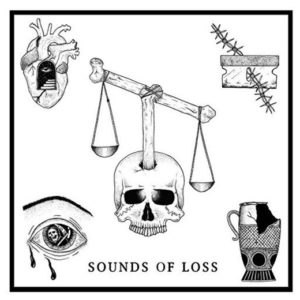 When it comes to heavy music, there’s no shortage of drastic hyperbole or absurd similes that get tossed around about your favorite bands. “It’s like listening to World War III,” or “it sounds like pure darkness looks”—chances are you’ve heard these tossed around about (insert metalcore/deathcore/hardcore band here)—hell, I’ve probably used them before. The point is that we’ve taken to likening heavy music to just about any form of violence or depravity that we can because of the emotions evoked by hearing your favorite breakdown/slam/riff/whatever.

But Orthodox are…well, unorthodox in this regard.

Where countless artists are content to capture the sounds of either depression, despair or total devastation, very rarely does a band attempt to capture all three—and among those that do, but a fraction are even successful. So when I say that Orthodox’s Unbeaten Records debut full length, Sounds of Loss is true to all that it’s name implies—to violence, bitterness and brooding, dark depression—that should be all you really need to read. Sounds of Loss is a magnificent record that combines influences from traditional hardcore, metalcore, death metal and sparse infusions of nu metal to make something more infernal than Satan’s breath and more intensely heavy than every Elephant in Africa combined.

Orthodox are an oppressive outfit that use every instrumental tactic in the heavy music arsenal to obliterate the listener’s sanity in seconds flat. Even by the time the jarring, looping opening riff of “The Anticipation” is complete, the listener is totally hooked. Eerie effects like those found in the album’s introduction and in “Resent Me,” “I’m Scared of You” and “In the Dark” see the band proudly wearing their love of 90s nu metal on their sleeves, while songs like “Panic” or “Second Best” are energetic and abusive in ways more exemplary of the band’s straight edge hardcore roots—no holds barred, brash and bold from start to finish, using fast drumming and frantic fretwork to bewilder the listener into a mosh-fueled frenzy. All the while, Sounds of Loss is filled in by deep, dismal pockets of shadow that provide incredible ambience and atmosphere. This is true in the very opening segment of “The Anticipation” as it is in “Dementia,” where lulls of brooding atmosphere fill in moments between blistering breakdowns or brazen, speedy riffs and grisly grooves. Sounds of Loss is as musically varied as the experience of loss truly is—be it violent, sorrowful, sinister or sudden, Orthodox capture every instance under the sun with their musical dynamism.

The same visceral intensity that makes the heavier moments of Sounds of Loss so engrossing is prevalent in Orthodox’s vocal element as well. Shrill and sharp, the band’s high and hellish vocal demeanor shaves away the listener’s sanity second by second, working excellently with the panic chords and squealing, feedback laden moments of songs like “The Anticipation” or “Resent Me” excellently—but they don’t end there. They serve as a brilliant contrast to the low, lurid and slightly slam-influenced moments throughout “Fallen Behind” and “Second Best,” even including burly growls and harsh mid-range yells at several points throughout the record to include variety and stave off monotony—a goal further accomplished by the appearance of Knocked Loose’s Bryan Garris in “In the Dark,” which stands as an early front runner for 2017’s best guest feature. Orthodox are an incredible onslaught of sound through and through—this is as true vocally as it is musically.

Far from monotonous, ripe with replay value and ruthless throughout its duration, Sounds of Loss is a hardcore album with flares and splashes of countless other styles to make it hit home harder than a sledge hammer. With catchier, quicker and distinctly “nu” songs like “Resent Me” and the near-perfect track “In the Dark,” along with several other examples of excellence, Orthodox give the heavy music community an album that stands to unify the opposing factions of fans split between genres. Eerie and emotional, don’t let the name fool you—there is not much at all that is truly orthodox about Sounds of Loss.

For Fans Of: Left Behind, Wicked World, Misgiver, Knocked Loose