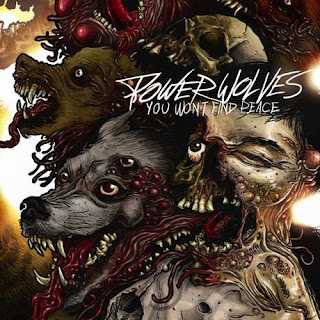 Fast, heavy and pissed off. Those are the first impressions of Merrimack Valley, MA’s Powerwolves. With their newest album, You Won’t Find Peace, releasing at the end of August, these guys are set up for a hell of a winter. Bringing elements of Hardcore and Punk, the 4-piece has their goals set even higher going into 2012. Here is a in depth review of the album, with key tracks, ratings, and some things I think could be better for them in the future!

Overview
When you hear the band play, you can actually feel the rage. Every riff and hit is played with so much intensity. The album is all you could ever ask for in a hardcore album. Solid production, amazing song structure, and guitar work that helps set the band apart from others that just do the constant dead note and breakdowns. After a full day of listening, I can tell you I am fan. Building off of this album going into 2012 is going to be amazing when it finally happens.
Key Track
Without a doubt the key track has to be Heavy Lies The Crown. Starting the song off with a great drum solo, the snare sounding amazing and having a nice pop to it. This song has the most rage in the entire album with notable lines of ” I’ll Never forget what you did!” Going through a verse and a chorus, the song completely changes tempos and then this is the part where the pitt is the most brootal. Clocking in at 2:12, this is a shorter song but nonetheless its a great song for letting out those anger issues or for those crazy drivers!
Final Thoughts
This album really speaks about the talent and experience this band has as a whole. I was really impressed with the musicianship and most notably, the guitar work. The leads are sounding really impressive and I’l give this album a 4.5 out of 5 stars! Catch Powerwolves live right now! They’re booking shows in locally and if you live in the MA area, get yourself to one of those shows!