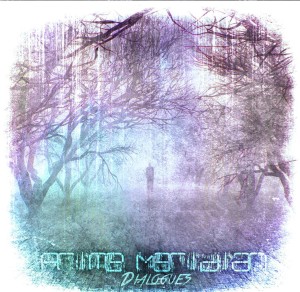 Ominous, brooding, hungry—no, insatiable—it waits. Patiently slinking deep within the darkest, most hidden recesses of your mind, it sharpens its teeth, building its appetite and bides its time until it is to strike. It is every ounce the definition of predator—every gram a feline hunting machine just as complicated as the ecosystem it dominates. Without warning, its teeth plunge into your skin, it’s saliva blends like venom with your blood—you are its victim, and it has become a part of you. It is Dialogues, the latest full-length release from Lancaster-based progressive deathcore outfit Prime Meridian. Dialogues is armed with precise, needle-point vocals and razor sharp riffs that are punched into the listener’s skin by hammering, intense percussion and blistering, bone-breaking heaviness. Prime Meridian become the most fearsome kind of predator there is: one that stalks and toys with their prey, teasing them with imminent death.

With little-to-no warning, Dialogues strikes the listener down with calculated fury and visceral carnage. Prime Meridian shred into the listener’s jugular with riffs as sharp as a jaguar’s incisors, and claws as well-honed and deadly as an eagle’s. “Trauma” subtly toys with the listener—just long enough to pique their curiosity—before jumping directly into “Starving Artist,” a song that wastes no time in separating flesh from bone with intense, dynamic shredding. Bouncy, crystal-clear guitar toggles back and forth into ambient, splashy sections and down-tuned chug-heavy portions. In this manner, the fretwork throughout Dialogues is a beast that is deadly on two counts—the ability with which it can maim its prey, and the jarring weight with which it crushes them. “Glass Casket” is another beautifully written song which is constantly and belligerently weighing down on the listener with bass-and-guitar work that is nothing short of oppressively heavy. Just as it seems like the pressure building upon the listener by the chugged-out grooves and brutalizing breakdowns is too much to bear, razor-like riffing cuts the listener from head to haunches, releasing not just the pressure, but their visceral contents as well. This track works especially efficiently as contrasted with “Interference,” a song which begins in a transient and hyperambient manner, only to gradually grow and morph into an oppressive masterpiece.

After every ounce of visceral life has been torn from the listener’s carapace and their flesh lies torn and scattered by the fangs of Prime Meridian’s premier fretwork, one might expect the predator’s work to be done. This, however, is far from the case. Dialogues is home to crushing heaviness and rampant disregard for the listener’s skeletal remains as it turns their bones into splintered shards fit only for toothpicks. Here, “Plagiarist,” as well as “Shameless” stand beyond the remainder of the tracks Prime Meridian throw at the listener as hard-hitting heavyweights. This is due in part to a combination of crushing, downtuned grooves from the bass and guitar as well as an incessant pummeling from the percussion. The bass drum sounds thick—dense even—as if it was made of lead. Furthermore, when combined with the snapping, plodding bass guitar, the chug-heavy portions of every track on the release reach a meaty, rich tone that is, for lack of a better word, punishing. Alongside each sinister snap of the bass guitar and crushing kick from the bass drum, there is a constant vocal assault that wears the listener down to dust, grinding their already snapped and frayed bones into powder. “Plagiarist” especially makes a brilliant use of high-and-low vocal dynamics to kick and punch the listener into submission. “Starving Artist” is another stellar example of this—as it is a track that begins with an intense series of hammering grooves that work as a canvas for bellowed low vocals and screeching high screams alike.

As skin-rending, flesh-distorting technicality meets bone-breaking and cartilage-crunching heaviness, the listener can bear true witness to the predatory beauty of the jungle cat that is Dialogues. With the cunning, slinking brilliance of a leopard and the no-holds barred ferocity of a lion, Prime Meridian make mince meat of the listener. Lynx-like lyrical brilliance and vocal prowess flow and transition wonderfully between moments of unfathomable heaviness and ethereal ambience with a talent that puts Prime Meridian’s peers to shame. Perhaps one of the most keen and well-honed aspects of the band’s predatory nature is their ability to do all of this—to flow fluidly and smoothly—all while keeping the listener on the edge of their seat. At no point during the entire run time does Dialogues become predictable. Each moment is a sweet, shocking surprise, from jarring, slamming breakdowns to beautiful, entrancing melodies: this album is a flowing, smooth work of art that hypnotizes the listener only to lull them into a false sense of security and devour them.

No one—at least not I—saw this coming. Dialogues is a remarkable album that keeps the listener completely engrossed from beginning to finish. However, by the time Prime Meridian are done with the listener, there isn’t likely to be much left. Slicing shred and crushing chugs leave nothing but blood spatters and bits of dust of the listener’s unsuspecting body, feeding off of their corpse and leaving no amount of meat to go to waste.