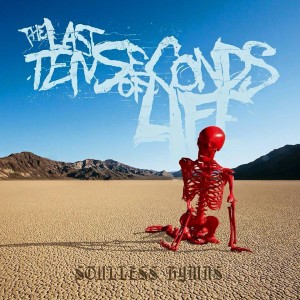 You startle awake, shocked at the ability to use your limbs. When we last left The Last Ten Seconds of Life, the listener was paralyzed, become slowly devoured from the inside out by the misanthropic specter that was their sophomore full length, Invivo [Exvivo]. If Invivo was mind-consuming fear, and flesh-possessing self-loathing, the band’s most recent release is no-holds-barred sociopathy and brain-blistering malevolence. Taking the same darkness and energy that the band’s unique blend of nu-metal and Deathcore is known for and turning it outward, the listener is given Soulless Hymns: one of the most psychologically immersive and aggressive offerings heavy music has seen in years. Picture-perfect guitar tones, relentless percussion and limitless vocal variety define The Last Ten Seconds of Life’s latest album as their magnum opus, an album so intense it guts and skins the listener, leaving them hopeless, boneless and soulless.

Where Invivo [Exvivo] was home to dark instrumentation that fed on the fear and hate of the listener, Soulless Hymns‘ instead gives rise to it. The Last Ten Seconds of Life are just as instrumentally tight as they have always been, but Soulless Hymns sees them infinitely more focused and exponentially more energetic. Listeners looking for evidence of this need look no further than the boundless brutality provided by percussionist Christian Fisher and bassist Anthony Madara. Fisher and Madara are the Coal-powered, darkness-fueled engine powering Soulless Hymns. From the very beginning of “As the World Turns Over,” the duo are hell-bent on hammering the listener with crushing, booming toms, razor-sharp cymbals and writhing, grimy bass riffs. Their dynamic is amplified on the poetic, yet punishing “Heavy Headed,” which–while built like a nu-metal ballad–relies on Fisher’s meaty kick drum and Madara’s smothering bass tones to keep the otherwise ethereal fretwork of Wyatt McLaughlin in check. In the simplest and most honest terms possible, guitarists like McLaughlin are a rare breed. He can go from unfathomably heavy chugs and intense riffing–a la “Guillotine Queen”–one second, to enormous atmosphere (see the aforementioned “Heavy Headed”) the next. What’s more? McLaughlin’s magnificent style and serene (or slaughter-house) tone is one of the most distinct and immaculate on the scene. Out of a library of over 16,000 songs, when the barn-burner “North of Corpus” came up, I could tell who it was by the guitar tone alone. Musicians like those found making up the backbone to The Last Ten Seconds of Life are few and far between–and even harder to find working together in the same band.

As Soulless Hymns churns along, driven by its trifecta of terrifyingly talented musicians and crushing all in its path, it’s musicianship remains a podium for the veritable legend that is the band’s vocalist. Storm Strope is a beast–and where The Last Ten Seconds of Life’s last release was a tell-all upon which to spill the darkest corners of his mind, Soulless Hymns is his manifesto of magnificently molded misanthropy. “Ballad of the Butcher” is just this–a song whose lyrical content is just as dark and aggressive as Strope’s sinister delivery. Where McLaughlin’s fretwork is unique or rare, Strope’s vocals are one-of-a-kind. “The Dream is Dead” is one such example–where he can be seen covering every inch of his impressive range. Likewise, Soulless Hymns sees Strope step up his game lyrically–as “Guilty Pleasure,” “North of Corpus” and “As the World Turns Over” are all gems of lyrical brilliance the likes of which rarely grace such bone-busting and brutalizing heavy music.

Between Strope’s surreal vocal skill and the marked ability for Madara, McLaughlin and Fisher to create an intense and emotional musical soundscape, the take away message is simple: there just isn’t a band that does it like The Last Ten Seconds of Life do it. This furious four piece’s ability to blend catchiness and crushing aggression is nothing short of witchcraft. When Strope sneers “spilling out at both ends, feeling like a dead man,” or as Fisher’s bouncy tom fills bob away in the background, the listener’s brain simply gets reprogrammed by the group’s cunning ability to invade any cranial space, big or small. Meanwhile, the oddly atmospheric solo that defines the climax of “North of Corpus,” or the thrashy riff that weaves throughout Madara’s bass grooves in the anthemic “Meant to Be Free” is eviscerating. The result? The Last Ten Seconds of Life’s Soulless Hymns is an album that is not just instrumental heavy, but psychologically invasive.

With breakdowns and grooves that his as hard as those on “The Box” or “The Dream is Dead,” I have no use for a soul. Far from a guilty pleasure, The Last Ten Seconds of Life’s Soulless Hymns is an immense, unstoppable display of Deathcore-meets-nu Metal prowess that has the listener hoping they do indeed do this forever.