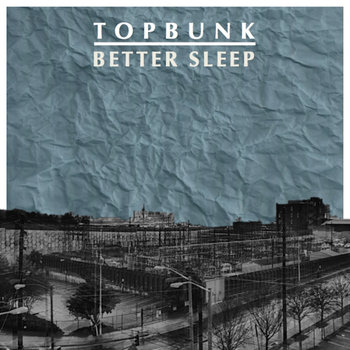 Things are never as straightforward as we want them to be. It’s a lesson we learn as quickly as we forget it. There are times we find ourselves inexplicably feeling the opposite of what we “should.” We crackup at a funeral or cry over milk that hasn’t even spilled yet and we realize in those rare flashes of clarity that life is, on its best days, a slapdash operation. We see that despite all our desperate posturing and planning, none of us really have any clue what we are ever getting ourselves into. Recently, Topbunk, the self-proclaimed “lanky southern boys of emo” taught me that lesson with a vengeance. I picked up their new EP “Better Sleep” the other day with intention of kicking back to some clean and easy emo. That expectation should’ve been my first warning.

From its howled opening words this four song EP punished me for underestimating it. This 21st century two-piece from Georgia manage to sound like a 90s four piece from Ohio. Topbunk play emo with the heartfelt sincerity of the genre’s best and manage to do so without the strain other bands unwillingly exhibit. These guys aren’t out there trying to sound like Braid or Snowing, they just do. From its sloppy yet technical guitar work to its lovable low production sound “Better Sleep” brandishes the bands talent and passion without hitting you over the head with it. Its evident from the punchy drumming and twinkly guitarwork that they’re having fun with these tracks but, lyrics like “I stayed up all night wondering if you dream while you had nightmares” prove that Topbunk aren’t strangers to the sentiments of good emo.

But, it’s the intimacy of “Better Sleep” that makes it more than just a pleasant surprise. Its not often that a band as catchy and fun as Topbunk can remind you of the messiness of life without ruining the carefree atmosphere of their music. These guys have happened upon an endearing but deeply emotional sound that makes me simultaneously feel like I’m at a shout-a-long basement show and alone in the dark in my room. Tracks like “Branigan” and “Rosie Had a Stroke” keep up a driving power that I can’t help grooving along to but, those same tracks could be the soundtrack to some of my rougher days. Overall, for the little over ten minutes that “Better Sleep” offers its packs a gut wrenching punch that most full length albums would be happy to land even once or twice.