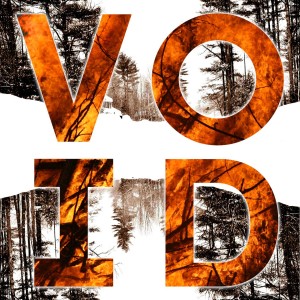 Inside of you there is a space—an ever-expanding lapse—as black as tar and mysterious as a question mark. With every new day, it widens, engulfing some new component of your menial, 9-to-5 existence, searching for something that can fill it, and leave it satisfied. However, as more and more of you is eaten up by this emptiness, the truth becomes clear: it cannot be filled, quenched or satiated. This Void is limitless and unstoppable—this Void is the latest studio release by Massachusetts metalcore masters, Vanna. Void is an all-conquering, all-devouring darkness that brilliantly combines frantic instrumentation, visceral to the point of throat-ruining vocals and introspective, intense lyrics to create an album that truly does engulf every release that stands in its way.

First, the Void goes after your possessions—every thousand dollar piece of plastic and shiny sliver of steel you bought to try and fill your life. Every scrap of fabric and cloth you purchased in an attempt to define yourself. The Void devours it all without a second thought and keeps on going. This is the manifestation of Vanna’s endlessly energetic instrumentation that comprises Void. Percussionist Eric Gross leads the charge, hammering out beat after beat and fill after fill of raunchy, devastating drumming. Even at his most mellow during the ambient, ethereal “Bienvenue,” his fills are still packed with utterly explosive force—let alone his mile-a-minute display of passion and power on “Holy Hell” or “All American’t.” Luckily for the listener, Gross is not alone on his driving, headlong sprint to the listener’s eardrums. Joel Pastuzak and Nick Lambert are right there with him, shredding, strumming and chugging along in perfect time. Pastuzak and Lambert provide a two-pronged tour-de-force in the form of furious fretwork, brilliantly blending stellar, untouchable riffs and chugged-out breakdowns that drag the listener through miles of broken glass—seen in particularly perfect execution on “Piss Up a Rope,” a song that smoothly rolls from groovy riffs to gory brutalization at the drop of a dime. These low, grimy portions of Void would not be nearly as remarkable were it not for the low end provided by Shawn Marquis’ constant bass work, rumbling and thudding a thick, beefy tone beneath the over-the-top energy of Pastuzak and Lambert’s rambunctious riffs.

Next, the Void moves on to your friends—every soul you surrounded yourself with to create a persona—plunging each and every one of them into the fathomless blackness. Without mercy or remorse, they vanish, lost in the sheer pitch that still refuses to cease. Each scream, cry, shout and yell they let loose—those are the vocals of Davey Muise, indiscriminately painting across Void’s instrumental canvas like Jackson Pollock. Void is home to a great variety of screams—each grittier than the last—which provide limitless variety to the manner in which Muise assaults the listener with depressive, intense and dark lyrics. “Piss Up a Rope” contrasts a shrill high scream with a harsh, mid-range yell to instill the track’s sensation of skin-peeling anxiety and urgency. However, “Bienvenue” casts Muise in a different light, showcasing his mellow, sedated side as opposed to the unstoppable can of whoop-ass that is opened on the duration of Void. Where Vanna’s previous releases may have been rife with vocal monotony, this is simply not true of Void, as Muise is full of piss and vinegar, and certainly far from afraid to drown the listener in it.

Finally, your family. They are the last to meet doom at the hands of the ever-expanding landfill your soul has become. The Void consumes them, pausing for neither love nor sympathy as your mother, father, sister, brother—all vanished. But still, it needs more. The true nature of Vanna’s merciless monster, Void, is that it exists as something much greater than the sum of its parts. While Gross’ drumming is punchy and perfect in its own right—as is the insane fretwork from Pastuzak and Lambert—the two aspects combine to create something surreal. Even then, once topped off by Marquis’ lumbering bass and Muise’s masterful vocals, Vanna’s intensity becomes almost unbearable. Tracks like the rip-roaring “Void,” or “Humaphobia” soar along so quickly it feels as if the listener’s neck might snap.  Heaviness like that in “Piss Up a Rope” or catchiness like the sing-a-long “Personal Cross” aren’t defined by one aspect of Vanna’s dynamic over another—rather, they are the result of perfect instrumental synchronicity. Finally, “Bienvenue” allows the band to step outside of their comfort zone—however, rather than a meek misstep, the track shows them walking tall, unafraid to confront the Void that awaits them.

The only thing left is for the Void to collapse on itself—for you and every evil you created, everything and everyone you consumed, to truly vanish. However, Vanna refuse. This furious five-piece refuse to fade silently into nothingness—rather, Void is a supernova, exploding with emotion and fury one might expect from the offspring of Every Time I Die and Converge. At the end of it all, there is nothing—nothing but Void.

For Fans Of: Stray from the Path, Converge, Every Time I Die, Gaza