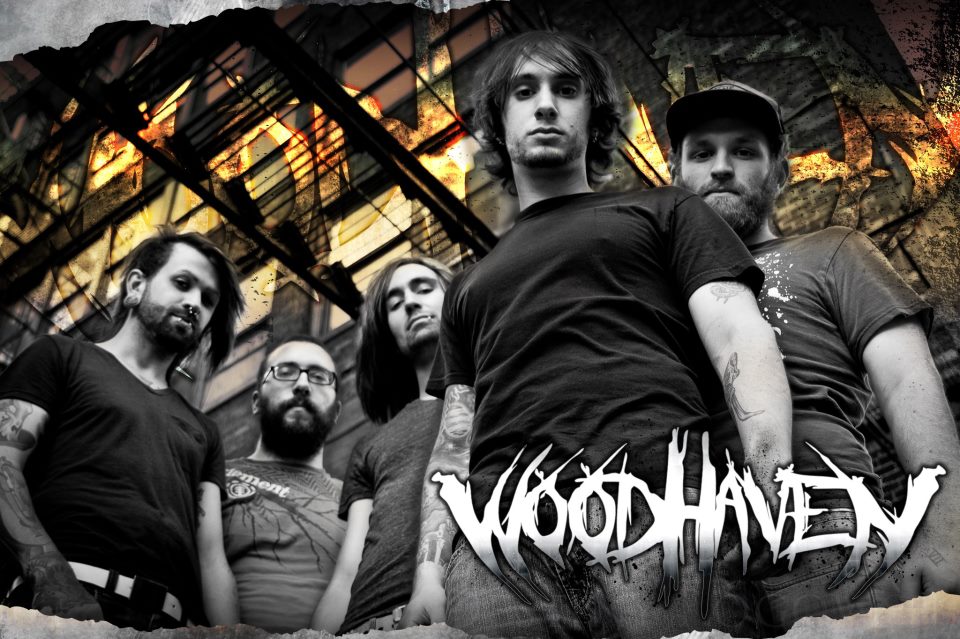 Looking down at your hands, it strikes you that you can’t exactly recall how they got so bloodstained. You got angry—yes, that must have been where it started. That’s where it always started—but before you had a chance to calm down and collect your senses, fists started flying. Then…there was a knife. Why you decided to carry a knife on you, tonight of all nights, simply escapes you now (but it must have made sense at the time, that much you know). The punchline is, all of the sudden, there was a trigger, a breaking point and…four people were dead with the blood on your hands. The trigger in question? Woodhaven’s latest EP, Requiem. From beginning to end, Requiem is murderously heavy and ridiculously fast-paced, giving it everything it needs to be the soundtrack to an impromptu killing spree.

There isn’t much you can remember from before the bloodlust set in and the adrenaline overtook your mind; but what you can remember is the visceral thudding and throbbing of your heart. Beating like an enraged bull trapped in a cat’s cage, your heart was roaring so a-rhythmically you thought it was going to rupture. Requiem begins in the same way. Deep, plodding drums and heavy, grimy guitar set the mood for the sludgy, heavy nightmare Woodhaven are about the thrust upon the listener. Then, before the listener knows it—the snap, as “Immolator” launches into “The Object of my Infection,” which showcases Woodhaven in all of the instrumental glory. The drums oscillate from break-neck, machine gun blast beats to a tempo-busting, snail-like looming pace. Likewise, the guitars are capable of intense, skin-splitting speeds and thunderous, earthquake-inducing chugs. While the furious pace of the fretwork is impressive enough as is, the fact that neither guitarist in Woodhaven sacrifices technicality for speed is what makes them truly noteworthy. “Imperium,” for example, manages these time-changes and soul-splitting shred sections with particular efficacy.

The screams. Yes, those you do remember. You could have let them live—after all, they were all well incapacitated before they were rendered lifeless by your steady, precise hands. Perhaps it was some voice in your head or just killer instinct, but you went through with it and took the life from each person there. Woodhaven is no different—and the screams, shouts, yells and bellows throughout Requiem are proof. Woodhaven employ nearly every pitch, style and tone in the deathcore vocal arsenal to attack the listener’s ears and slice their brain to shreds. “Annihilationism” is one track which does this particularly well—switching vocal styles at the drop of a hat; from a skyscraper high scream to a growl which sounds as if it comes from the core of the earth, the vocal styles are constantly intriguing and anything but monotonous or boring—something which plagues the likes of Woodhaven’s peers. “The Object of my Infection” is another track which is vocally uncompromising—much like Requiem itself is uncompromising. Never satisfied with residing in the middle ground, Woodhaven are a band of extremes—making them of extreme noteworthiness in a genre laden with mediocrity.

The only other thing you can actually recall between fits of fury was the killing. Never before had you felt so…yourself. Chuckling, you smirk at the subtle humor that it took robbing four people of their lives to make you finally recognize the vivacity of yours. Between the incessant instrumental attacks and the belligerent, bipolar vocal onslaught, Requiem is the life force of modern deathcore—it is the organ pumping fresh blood and clean air into the decrepit carcass of overused chugs and uncreative blast beats. Each section on each track of Requiem is meticulously written to flow smoothly while still mind-numbingly heavy. “Annihilationism” for example is simply surreal—with a climactic breakdown which curb-stomps the listener with extreme prejudice, and intense and awe-inspiring technicality juxtaposed perfectly without sounding choppy or forced, it is an archetype for modern deathcore and an inspiration for bands of the future.

Well, blood on your hands or not, those people are dead now. So what do you do? Turn yourself in? Give up? No—wipe it away and move on—as just as this may not be the last time you kill, surely Requiem will not be the end of Woodhaven’s ascension to deathcore stardom.

For Fans Of: Oceano, Thy Art is Murder, Forsaken, Towers, Exhumed