Check out the full albums of each band from the WMMR BBQ by clicking here!

I have to give it up to Philly rock station, WMMR. They know how to put on a good rock show. I have not seen a lineup like this for a single show in at least 10 years. Going to the WMMR BBQ reminded me of a happier time in music when tours were put together that made complete sense; where if x band was headlining, it was more than likely that the fans present would also love band 2, band 3, band 4, etc… This show simply clicked. Although the line-up was Cold Roses, Rival Sons, The Pretty Reckless, Halestorm, Seether, Breaking Benjamin, Stone Temple Pilots (with Chester Bennington), and Slash with Myles Kennedy & The Conspirators. Unfortunately, I was only there to witness Halestorm, Seether, Breaking Benjamin, and Stone Temple Pilots, of which I will review and provide photography of said bands below.

Picture this. It’s about 4PM (EST) and the entire amphitheater is mobbed. At this point of the show, what your ticket says does not count; meaning that you could go anywhere you damn well please…if you could fit of course. The Susquehanna Bank Center in Camden, NJ was so packed, I had my own trouble making my way into the photographers’ pit. It was a sight to behold.

Whether you consider yourself a casual Halestorm fan, a “freak,” or not a fan at all, there is one ever-present fact: Halestorm can bring it live. They take the stage by force and have some amazing charisma and fan interaction opportunities. Lzzy Hale’s vocals are on pitch, on point, and are extremely crisp live, while the band plays as tight as a rope. Their performance did a great job of filling the entire sonic spectrum. This was my second time seeing Halestorm; the first time being when they got their initial start around 2005. I was glad I got to see them come as far as they have in the world of music.

Okay, it’s time for general admission for all to end. I can finally breathe. But, wait. People keep on coming in the entrance in droves. How can this place hold all these people?!? It was an overwhelming feeling (in a good way) to see all these people coming together for this singular purpose. It warmed my heart. Much to my surprise, unloading the “un-ticketed” or rather “improperly ticketed” people and reloading with the correctly ticketed was done fairly quickly, with plenty of time to spare before Seether took the stage.

I have seen Seether more times than I would like to admit, but I do not mind that whatsoever. Why? Because ever since I started seeing them play live during the Disclaimer era, they have not put on one single bad or even mediocre show. Every time these guys play, they give it their all. On the plus side, the guys in Seether have always been nice and humble as well towards their fans. And, knowing that about a band always makes it a better experience.

6) Nobody Praying For Me 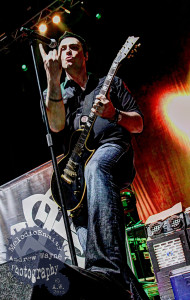 The sun sets. The breeze comes tumbling in to relieve the oppressive heat of the day. People are glued to their spaces in anticipation. Rightfully so, because BB IS BACK, and those who have not seen it for themselves yet, are there to make sure that it has truly happened. They want to pinch themselves, just to make sure that it is real.

Again, Breaking Benjamin is another band that I have seen more times than I would like to admit. And, just like Seether, Breaking Benjamin never disappoints. In fact, they put on one of the highest energy shows out there. Not a single person in the venue was quiet as they were all singing and screaming along to Benjamin Burnley’s hypnotically powerful vocals, including myself. And, trust me, trying to shoot photography and sing-along at the same time is not easy!

Burnley has one of the most interesting voices in the rock industry today, and has used it to create a sub-genre of rock that is really all his own. I’ll admit, I was horrified when Breaking Benjamin first “broke up.” I did not know how they would go on without the rest of the members. But, I will also admit that I am horrified no longer. Although it is a shame that the band had to be reformed and undergo what they had went through, the new line-up is just as amazing as the last. If you don’t believe me, just go check out a live show and take a listen to the already released tracks from their upcoming full length “Dark Before Dawn.”

Rain delay. Tickets specifically state that the show will go on rain or shine. Mass confusion. Someone from WMMR comes on stage and tells the people sitting out in the pouring rain who are on the lawn must come inside. No one moves. Who wants to give up their space that they have had all day? After about 30 minutes, people begin leaving out of frustration, and the lawn, as well as my many indoor seats, clear out. When said and done, even though the weather did not let up, the show continued about 40 minutes after Stone Temple Pilots were supposed to originally come on.

Now, don’t get me wrong. I love Stone Temple Pilots. I love Chester Bennington’s voice. I have seen Stone Temple Pilots a number of times with Scott Weiland as well as Linkin Park. To me, the two do not mix the way they present themselves now. It feels like Chester is trying to be Scott Weiland on stage and not himself. Chester even throws his voice to try and get that swagger that Scott has. I actually like a few of the tracks off of the new Stone Temple Pilots EP with Chester, but live, it becomes kind of confusing.

Let me start with the good. The band was just as fantastic as they ever were. I love seeing the band play as they are excellent musicians and truly masters of their craft. But, in my honest opinion, I feel that Chester needs to be Chester. I want to hear Mr. Bennington’s voice. I want to hear his gritty soaring vocals that he uses whilst in Linkin Park. But, instead we get an impersonator, in both vocals and stage presence. I just do not understand why. There is absolutely nothing wrong with the band, and I feel if Chester goes back to being Chester on stage, we would have something incredibly special.

Check out the full albums of each band from the WMMR BBQ by clicking here!